Dollar slips on euro as lower U.S. yields give markets a breather 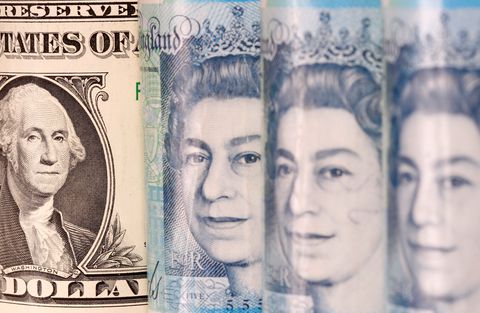 The dollar slid on Tuesday, as U.S. Treasury yields paused in a relentless climb higher, providing brief relief to share markets and helping the euro in particular move further off multi-year lows.

The Australian dollar was also in focus, sinking after the nation's central bank surprised markets with a smaller-than-expected interest rate hike.

A calmer British government bond market was a relief for the pound after recent government-inspired turmoil. In a statement on Monday, the Bank of England reaffirmed its willingness to buy long-dated gilts and the head of Britain's debt management office, overseeing the bond market, told Reuters in an interview the market was resilient.

However, demand was soft for a sale a 40-year British government bonds.

"The pullback by the U.S dollar has coincided with a sharp correction lower for U.S. yields," MUFG analysts said in a note to clients, adding that the two moves had "brought some much-needed relief for risk assets and high-beta currencies."

MUFG flagged the New Zealand dollar up 2.6% since the start of the week and Norwegian crown , up 3% this week, as particular beneficiaries.

The moves in the dollar and yields appear to partially reflect market participants' greater comfort that the Fed is moving closer to the end of its rate hike cycle, MUFG said, expectations that were supported by weak U.S. manufacturing data released Monday.

"Market expectations for the Fed’s terminal policy rate for next year have come down from around 4.75% to 4.39%," they added.

The benchmark 10-year Treasury yield was last 3.5815%, down sharply from last week when it briefly poked above 4%.

The relentless climb in U.S. yields, as the Federal Reserve raises rates aggressively, has been one factor behind the dollar's recent gains.

Shares in Asia and Europe also rose on Tuesday in line with the improved sentiment, following overnight gains in the United States

Elsewhere the dollar was little changed against the Japanese yen at 144.7 yen , keeping below 145 after briefly popping above that level on Monday for the first time since Japanese authorities intervened to support their currency on Sept. 22.

The Australian dollar was down 0.64% at $0.6472, dragged down after the Reserve Bank of Australia raised rates by a smaller-than-expected 25 basis points, saying rates had increased substantially in a short period of time.

"Obviously the RBA hasn't been persuaded by what other central banks are doing, which does make the comment that they don't have any concerns about the exchange rate down here," said Ray Attrill, head of FX strategy at National Australia Bank in Sydney.

"There's no evidence yet that other central banks are about to step down the aggression with which they are tightening policy, (so) I think it makes sense for Aussie to be below 65 for the time being." (Reuters)

More in this category: « Philippines and U.S. kick off naval exercises amid China tension Pressure on Germany as energy crunch revives EU divisions over joint debt »
back to top
Home
//http://180.250.107.174:1935/voinews/stream/playlist.m3u8