RI to discuss boosting cooperation in energy transition with Japan 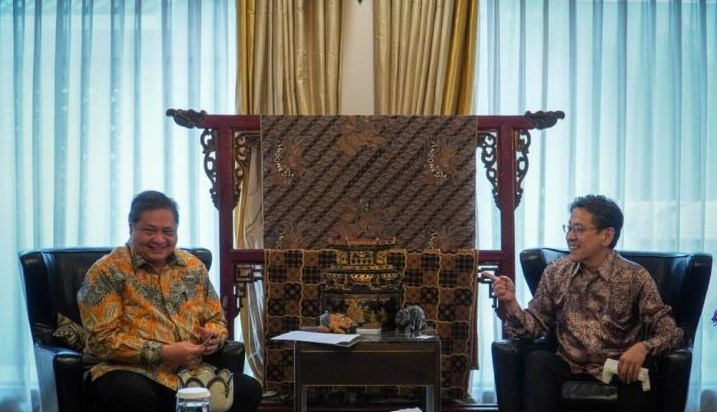 Indonesian Coordinating Minister for Economic Affairs Airlangga Hartarto received a visit from Advisor to the Japanese Government's cabinet, Maeda Tadashi, to discuss ways to increase bilateral cooperation, including in energy transition, to achieve carbon neutrality."The Indonesian government continues to encourage and accelerate sustainable development based on the green economy, green industry, and green technology," Hartarto stated during a discussion on carbon neutrality, as quoted from a statement received here, Thursday.The minister noted that Indonesia targeted to increase the percentage of renewable energy in total energy sources, from 11.5 percent in 2021 to 23 percent in 2025.In 2021, the acceleration of energy transition in Indonesia's power plants was recorded to reduce carbon dioxide emissions by 10.37 million tons, or more than double the target.In addition, Japan and Indonesia agreed to be the initiators in realizing the concept of the Asia Zero Emission Community (AZEC), which was also an agreement between the two heads of state -- President Joko Widodo and Japanese Prime Minister (PM) Fumio Kishida -- during a bilateral meeting at the G20 Summit in Bali on November 14, 2022.Through the AZEC initiative, Indonesia received first-priority funding of US$500 million to implement the energy transition program and expand public-private cooperation and decarbonization initiatives.The AZEC initiative is based on the belief of the two countries that Asia, as the center of global economic growth, will become the driving force for the world economy as well as a model in realizing a rational, sustainable, and just energy transition while considering different national conditions.The two countries also believe that supply security, affordability, and people-centric are the main keys in the energy transition process."Japan and Indonesia share the same idea that energy and the economy must work together to achieve prosperity by maintaining sustainable economic growth and transforming energy towards carbon neutrality or net zero emissions," Hartarto stated. (Antaranews)