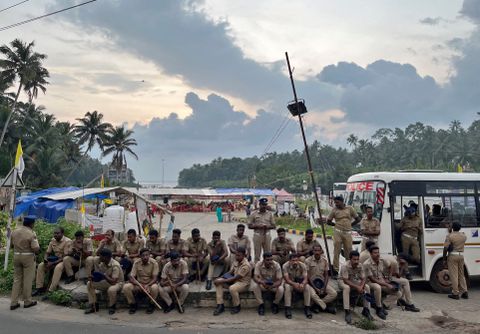 Protesters from a fishing community blocked attempts by India's Adani Group to restart work on a $900 million transhipment port in south India, a company spokesperson said on Saturday, prolonging a deadlock that has stalled the port's development.

Construction at Adani's Vizhinjam seaport in Kerala state on the southern tip of India has been halted for more than three months after protesters, mostly Christian and led by Catholic priests, erected a large shelter blocking its entrance, saying the port's development had caused coastal erosion and deprived them of their livelihoods.

The Adani Group, led by the world's third-richest man Gautam Adani, attempted to move heavy vehicles into the port on Saturday following a court directive this week that construction work must resume, but protesters blocked them from entering, an Adani spokesperson in the southern state of Kerala told Reuters.

Around 25 trucks had tried to enter the port and were forced to turn back after two were hit by stones thrown by the protesters, the spokesperson added.

Television footage from local news outlet Manorama showed dozens of police officials in riot gear deployed outside the port and arguing with protesters. A group of protesting women were also seen lying on the road leading to the port.

"We won't let them in," a protestor was seen screaming at police officers near the port entrance site.

The Adani Group has said the project was in full compliance with all laws and that many studies in recent years have rejected allegations linking the project to shoreline erosion. The Kerala state government says erosion has occurred due to natural disasters.

The deadlock is a major headache for Adani, who runs a $23 billion ports and logistics business and has touted the seaport's "unmatched location" on a key global shipping route. The port is considered potentially well-positioned to win business from ports in Sri Lanka, Singapore and Dubai.

In recent months, the Adani Group has repeatedly sought relief from the Kerala state court, which has said the entry and exit of the port must not be blocked, but protesters have refused to relent.

"We won't remove the protest shelter no matter what. This is a matter of our lives," Joseph Johnson, a protesting fisherman, told Reuters on Saturday.

The 1,200 square-foot structure, with a corrugated iron roof and banners proclaiming "indefinite day and night protest", has blocked the entrance of the port since August. A previous attempt by Adani in October to move trucks out of the port also failed. (Reuters)

More in this category: « Decision over sending Patriot air defence to Ukraine lies with nations - NATO Ukraine president’s chief of staff says Russia 'will pay' for Soviet-era famine »
back to top
Home
//http://180.250.107.174:1935/voinews/stream/playlist.m3u8