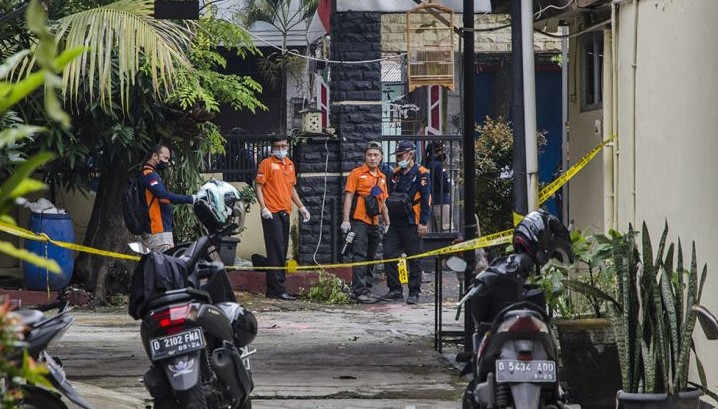 Religious Affairs Minister Yaqut Cholil Qoumas condemned Wednesday’s suicide bombing at Astanaanyar Sectoral Police Station, Bandung city, West Java province, and emphasized that the attack was against humanity."We conveyed our deepest condolences for the incident at the Astanaanyar Sectoral Police Station, as it has resulted in many victims, damage, and even fear (among the public). It is clear that the suicide bombing is against humanity," he said here on Wednesday.He noted that the terror attack killed one policeman and left nine other personnel injured.In addition, a resident was also injured in the explosion, which occurred during the morning assembly of Astanaanyar Sectoral Police officers.“The Astanaanyar bombing proves that acts of violence always harm many parties," the minister said.He lauded the quick response of the National Police chief, General Listyo Sigit Prabowo, who went directly to the location of the incident.The police also identified the perpetrator, who was confirmed to have died at the location.Based on a fingerprint and facial analysis, the perpetrator was identified as Agus Sujatno, who was said to be affiliated with the terrorist group Jamaah Ansharut Daulah (JAD)."We support the efforts taken by the National Police chief to thoroughly investigate this case and explore the possibility of other perpetrators," Qoumas said.He further said that he is concerned with the actions of some people and groups who are still using violence to express their different views.The method is clearly not in line with the teachings of any religion, which always prioritize respect, politeness, and safety of the community, he stressed.In addition, all religions teach people to promote and carry out dialogue to resolve social problems.“Hence, we encourage religious leaders to keep building good communication with the community to find the best solution (for issues). Religion must be used as a solution for life (problems), which is not an excuse for committing violence," the minister added. (antaranews)

More in this category: « Indonesia-Vietnam To Increase Target Of Bilateral Trade Value Strengthen Health Protocols Ahead of Year-End Holidays: Ministry »
back to top
Home
//http://180.250.107.174:1935/voinews/stream/playlist.m3u8