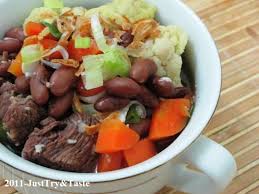 Magelang is one of  cities in Central Java province, which  has charming, wonderful  and beautiful nature. Unsurprisingly, the city becomes one of the favorite tourism destinations in Central Java.  As one of the most favorite tourism destinations in Central Java, Magelang has a lot of amazing tourism objects such as cultural and historic sites, contemporary photo spots, hills, parks and waterfalls that may really spoil the tourists’ eyes. The tourists who visit will also be served with a variety of delicious culinary of Magelang. One  of them is Senerek Soup.Senerek soup is one of the menus from the Dutch colonial era in Indonesia.  Senerek is taken from the word 'Snert' which means  ‘peas’ in Dutch. Because the tongues of the Magelang people were not very fluent in pronouncing “Snert“, the term slowly changes to be “Senerek”. Apparently, the snert soup was then modified with ingredients to be easily obtained by the local people, namely red beans. This soup is with complete vegetables such as carrots and spinach and it is added with  chives by using  herbs  spices as cloves and nutmeg. Then, all of these are   doused with fresh broth filled with beef or tripe. If we enjoy the soup, the aroma of garlic is so strong. The sauce tastes fresh, savory with a broth that tastes delicious. The Senerek soup is usually served with warm rice and chili sauce, as well as a variety of complementary food that can be selected based on our  taste, such as snail satay, tofu and tempeh. In Magelang, you can easily find this soup. The price is relatively cheap, about Rp 15,000 to Rp 20,000 per portion.