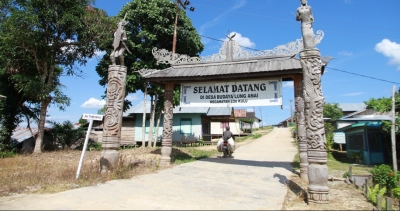 Lung Anai is one of villages at Loa Kulu district, Kutai Kertanegara regency, East Kalimantan province. The village has the status as cultural village since 2007. Interestingly, the village is one of thebirth points of Dayak Kenyah community, precisely sub tribe of Lepoq Jalan. Dayak Kenyah Lepoq Jalan tribe, comes from Malinau region, North Kalimantan, exactly from Apau Kayan village. Currently, the tribe settled surrounding 20 villages in East Kalimantan. But the largest community existed at Lung Anai. According to history, Dayak Kenyah Lapoq Jalan community began to come to Lung Anai  in the 1960s.

To reach Lung Anai tourism village it takes 3 hours from Samarinda, the capital city of East Kalimantan through land transportation. You will pass through winding and rocky roads. However, you can enjoy green pasture views and shady trees along the trip. Once arriving at Lung Anai village, you will directly see Lamin house. Lamin is traditional house of Dayak Kenyah tribe. The house is usually used to welcome guest and become the center of all traditional ceremonies of the local people. Lung Anai villagers still preserve their tradition until nowadays.

One of traditions which is still preserved by Lung Anai villagers, is Uman Undat. The ceremony is an expression of gratitute toward abundant harvest in a year. The ceremony is conducted by pounding rice in a mortar to be flour, after that entered into pieces of bamboo then burned. After the rice flour in the bamboo has cooked, then  eaten together with the villagers. Tourists who attend the ceremony, can participate in Uman Undat tradition. In Lung Anai tourism village, you can also buy typical handicrafts of the village as souvenir.

More in this category: « Pagoda of Lumbini Park, North Sumatera National Park of Ujung Kulon »
back to top
Home