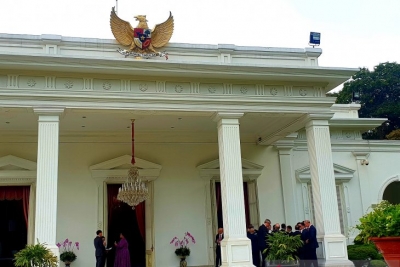 Indonesian President Joko Widodo during a discussion with Zimbabwe Ambassador to Indonesia Sophia Nyamudeza at the veranda of the Merdeka Palace, Jakarta, Wednesday (11/20-2019). Several ambassadors on the right side of the veranda waited to hold discussions with the President, who was accompanied by Foreign Minister Retno Marsudi. ANTARA

Indonesian President Joko Widodo (Jokowi) held discussions with 14 new foreign ambassadors at the veranda of the Merdeka Palace, Jakarta, after receiving their credential letters on Wednesday.

The discussion was preceded by Argentina's Ambassador to Indonesia Gustavo Arturo Torres.

The agenda was carried out by the president while welcoming new ambassadors from friendly countries to Indonesia.

An amicable and warm atmosphere was visible from the gestures and smiles exchanged by the head of state with the ambassadors.

The ambassadors then individually held a discussion with the president, who was accompanied by Foreign Minister Retno Marsudi.

In addition to the Argentinian ambassador, representatives of friendly countries that held discussions with President Jokowi were Zimbabwe Ambassador to Indonesia Sophia Nyamudeza and Ambassador of the Republic of Iran to Indonesia Mohammad Khos Heikal Azad.