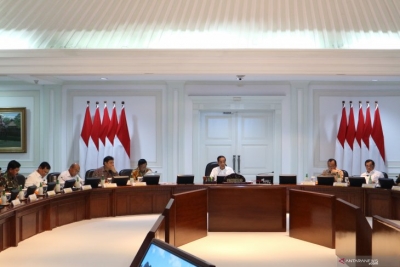 President of Indonesia Joko Widodo has ordered his ministries to trim firearm imports and instead strengthen the local weaponry defense system industry.   "First, I would like to mention that the country's roadmap on the weaponry industry must prioritize the state-owned companies and domestic private sector. As a result, we can be less dependent on weapon imports," President Widodo remarked at a meeting with ministers at the president's office in Jakarta, Friday.

The ministries must ensure that each firearm import deal will include the tech-transfer as well as cooperation between Indonesia and the foreign countries involved, he stated. With the orders he has issued, the President hoped the quality of capital resources of the domestic weapons industries could be enhanced. Apart from highlighting the importance of the domestic industry, the president also ordered ministries to keep up with the latest weaponry systems. "I don't expect us to still use the old, conventional firearms as it will not be suitable against future threats," he added.

"The TNI must be strong in all branch of services, including the Army, Navy and Air Force. For this reason, together with the Vice Minister, we want to strengthen the operational ranks of the TNI's real combat force, and we will strengthen the TNI," Prabowo remarked.

Firearms imports of Indonesia in 2018 amounts to US$354 million, far higher than the country's weapon exports that reach $15 million, according to a research launched by World Bank. (ANTARA)