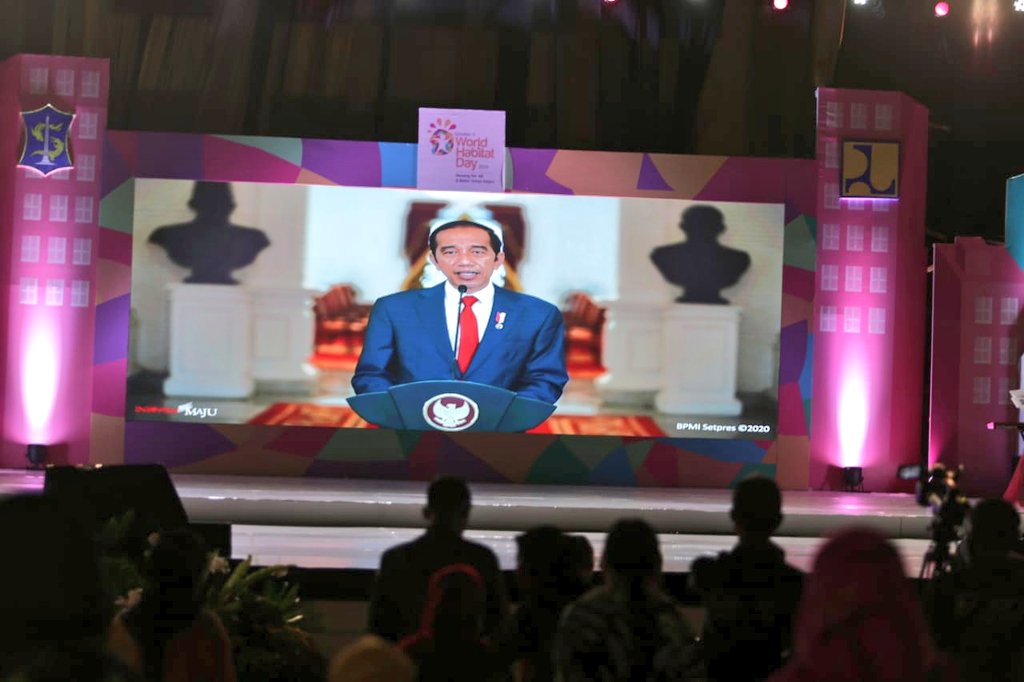 Indonesian President Joko Widodo reminded the importance of a new urban agenda at the opening ceremony of the World Habitat Day which was held at the Surabaya City Hall, on Monday (Oct5). President Joko Widodo in his speech which was broadcast virtually said, the World Habitat Day assures the world that the new urban agenda could not be delayed any longer. According to the President, 55 percent of the world's population live in cities and by 2050 the number of people living in cities is estimated to increase to 68 percent. The highest rate of increase occurred in the continents of Asia and Africa. According to the President, Indonesia is predicted to have a population of around 300 million in 2030 and 63 percent live in urban areas

President Joko Widodo considered the new urban agenda can be very important. If not prepared seriously, this rapid growth can trigger problems, ranging from population density and poverty, the environment, the availability of public space, the availability of basic infrastructure, especially clean water and sanitation, including housing problems and urban problems. However, if handled properly, the President believes that urbanization can be an opportunity for the nation to progress, become a center of creativity and innovation, spuring economic growth and improving the quality of life of its citizens.

Meanwhile, Mayor of Surabaya Tri Rismaharini said that settlements in the village are one of the keys in resolving the handling of COVID-19 in Surabaya. By not changing the culture of the village located in the middle of the city, the community can be more responsible in efforts to deal with COVID-19 in their environment.

With the theme “Housing for All: A Better Urban Future”, the commemoration of World Habitat Day 2020 was held in collaboration with UN-Habitat, the United Nations agency engaged in the field of housing and sustainable urban development. One of the factors for choosing Surabaya to host this event was due to the achievements obtained by Mayor Tri Rismaharini in the urban and residential sectors, on the commemoration of World Habitat Day 2018. Mayor Risma was awarded the Scroll of Honor Award from UN-Habitat at the UN headquarters in Nairobi, Kenya, for her policy towards inclusive planning of Surabaya city, so that none of its residents feel neglected.