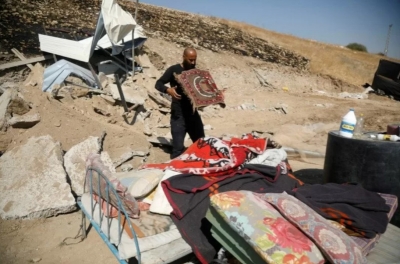 The Palestinian Journalists Syndicate (SJP) said Wednesday that Israel has killed over 46 members of the Palestinian press since the Al-Aqsa Intifada erupted in 2000.

This was revealed in a demonstration held in front of the UN headquarters in the Gaza Strip on the International Day to End Impunity for Crimes Against Journalists.

The SJP deputy chairman, Tahseen al-Astal, asked the United Nations to take on its responsibility in protecting journalists and bringing to justice the perpetrators of Israeli crimes against Palestinian journalists.

"Syndicates annually count between 500 - 700 occupation and (Israeli) crime attacks against Palestinian journalists and now is the time to stop these crimes and hold accountable those who committed crimes and those who issued orders," Al-Astal said.

He stressed that Israel's violations of journalists "aim to silence the press while preventing factual images from being conveyed to the world."

Israel has a long history of targeting journalists, the New York-based Committee for the Protection of Journalists documented 17 confirmed murder cases of journalists in Israel and in the Palestinian territories occupied since 1992.

As many as 15 journalists were shot dead by Israel in 2014, when Israel launched its final massive offensive against blockaded Gaza and killed more than 2,200 Palestinians. It was the bloodiest year for journalists in Palestine. (Anadolu-Antaranews)