President of South Africa: Visitors From All Countries Can Visit Us 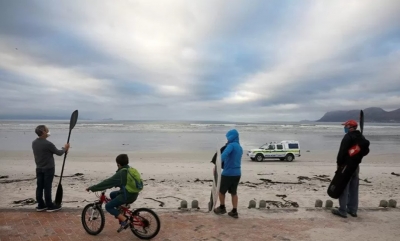 South Africa will allow entry of visitors from all countries in a bid to boost its tourism and hospitality sector, President Cyril Ramaphosa said on Wednesday.

South Africa, the continent's most developed economy, has seen an increase in infections since loosening lockdown restrictions in September to their lowest level.

With more than 740,000 cases of COVID-19 and at least 20,000 deaths, South Africa currently has the highest number of confirmed COVID-19 cases in Africa.

Ramaphosa, in a televised national address, said normal trading hours for alcohol would be restored as well. Alcohol sales were previously capped at the weekend in a bid to ease pressure on hospitals for alcohol-related accidents.

"We also open international travel from all countries by complying with the necessary health protocols and submitting negative COVID-19 certificates," he said.

"By using rapid testing and close monitoring, we aim to limit the spread of infection from imported cases," he added.

"We hope that these steps will be of great help to businesses in the tourism and hospitality sector."

However, Ramaphosa warned of a potential resurgence in infections, saying the number of new cases in the Eastern Cape province was 50 percent higher than in the previous week, with higher infection rates also seen in the Northern Cape and Western Cape regions.

"We have also seen in other countries how the re-emergence of COVID-19 can crush hopes for a speedy economic recovery," he said.

The president did not provide further details or a specific date for reopening. A presidential spokesman could not be reached for comment.

South Africa opened its borders to some international tourists in early October after imposing a six-month ban. At the time, however, restrictions were placed on visitors from high-risk countries, with the latest list including the United States, United Kingdom, France, Russia, Brazil, and India.

South Africa is heavily dependent on tourism, which before the pandemic accounted for nearly nine percent of gross domestic product and employed more than four percent of the workforce.

The economy was already in recession before the pandemic hit, and one of the world's toughest lockdowns has exacerbated woes. Millions of its citizens have lost their jobs or are increasingly pushed into poverty. (Antaranews)

More in this category: « Russia Is Ready To Establish Vaccine Cooperation With Indonesia 'Countdown to catastrophe' in Yemen as U.N. warns of famine - again »
back to top
Home
//http://180.250.107.174:1935/voinews/stream/playlist.m3u8