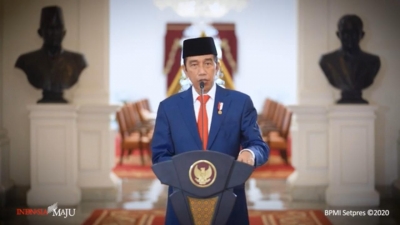 President Joko Widodo said he is optimistic that the economic policies rolled out by the government amid the pandemic will have a positive impact on and incentivize businesspersons in the country.Jokowi made the remarks at the virtual APEC CEO Dialogues 2020, which was uploaded on Youtube by the Presidential Secretariat here on Thursday.“I am sure that entrepreneurs, as well as domestic and international businessmen, will feel the positive effects of the various potentials and incentives from the economic policies issued by Indonesia during the pandemic,” the President said.Indonesia has been using the COVID-19 pandemic to build momentum for structural reforms, he remarked."In an extraordinary way, we have been fixing existing regulations, fixing existing bureaucracy in order to move quickly to pass the difficult times so that we are ready to open the widest possible door for businessmen and investors in new ways," Jokowi said.The President also said that Indonesia passed the omnibus law on Job Creation to massively simplify regulations under 79 laws by bringing them under a single law.He then invited CEOs and businessmen in the Asia and Pacific region to take advantage of the opportunities created by the new law, which comprises more than one thousand pages. (Antaranews)

More in this category: « Vietnam Embassy in Jakarta Holds Webinar on Trade, Investment and Tourism Indonesia to play key role in Asia-Pacific economic integration: ABAC »
back to top
Home