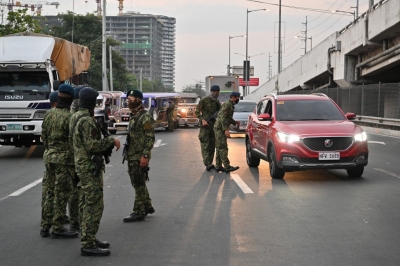 Metro Manila, a region of 12 million people, entered a month-long lockdown on Sunday as Philippine President Rodrigo Duterte considers a plan to impose a curfew on the area to try and contain the coronavirus outbreak.

Hours after Metropolitan Manila Development Authority General Manager Jose Arturo Garcia Jr. said Saturday that a 8 p.m. to 5 a.m. curfew will be implemented from Sunday until April 14, Duterte spokesman Salvador Panelo said the president had yet to approve the measure. The city will go into lockdown during this period, with schools and government offices largely shut, as the number of local COVID-19 cases climbed this week.

“Local government units can impose curfew within their territories if an ordinance is passed imposing it,” Panelo said in a mobile-phone message. A recommendation by mayors to impose a curfew in Metro Manila “is subject to the approval of the president. The president has yet to consider it,” he said.

The total number of confirmed cases in the country has risen to 111 and eight people have died after contracting the virus. Officials said they are also limiting services at the state-run Philippine Heart Center after 13 personnel were exposed to an infected person. Duterte, who tested negative for the coronavirus, is shutting malls, and banning movie screenings and concerts as part of the measures.

About 20,000 police were deployed to checkpoints at borders, though vehicles were still allowed to pass, ABS-CBN News reported on Sunday. Other areas in the Philippines are also enforcing travel restrictions, including the provinces of Bohol and Oriental Mindoro, and Davao City and the municipality of Coron in Palawan, CNN Philippines reported.

Photos on social media showed crowds lining up in bus stations since Friday, while supermarkets in the capital were emptied of groceries as shoppers hoard goods amid the uncertainty.

Malls will be shut, while supermarkets, hardware stores, drug stores, banks and health clinics inside them will remain open, Trade Secretary Ramon Lopez said in a mobile-phone message on Saturday. A prohibition on mass gatherings comes into effect Sunday.

Other details of the measures:

- Religious activities may continue as long as a 1-meter distance is maintained between attendees.

- The movement of cargo won’t be affected.

- Workers, whether employed or self-employed, will be allowed to travel to and from Manila. They will need to show proof of employment or business at checkpoints.

- Passengers in taxis, ride-shares, shuttles, jeepneys and buses must sit more than one seat apart; motorcycle taxis will be suspended.