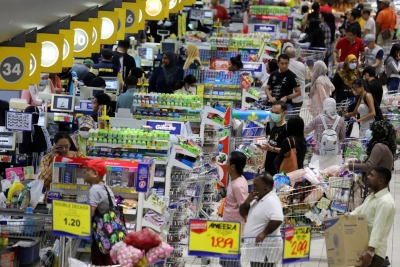 Malaysia went into a two-week partial lockdown on Wednesday after coronavirus infections in the country spiked to the highest in Southeast Asia, with some buyers rushing to supermarkets to stock up on essentials like instant noodles.

Malaysia and the Philippines, which has quarantined about half its 107 million population, have imposed the toughest restrictions on movements of people in Southeast Asia, causing early confusion and chaos, though capital markets in both countries will stay open.

Hours before the movement curbs kicked in at midnight in Malaysia, thousands of people queued up at bus stations to go back to their hometowns. Hordes of Malaysians who commute daily to Singapore for work crossed the border to spend the next two weeks there.

Roads in the Malaysian capital Kuala Lumpur, normally some of the most congested in Southeast Asia on weekdays, were largely clear on Wednesday morning. Some cafes and restaurants opened, but customers were allowed only takeaway food.

Big supermarket chains such as Mydin put in measures including special shopping slots and cashier lanes for the elderly and disabled and limited the purchases of staples such as rice, flour, cooking oil, hand sanitizers and disinfectants.

"People coming and rushing is still going to see the disease spread, said Ahmad Fauzi, 60, who had been up early to shop to avoid the crowds. "They should be more calm."

Malaysia reported its first two coronavirus deaths on Tuesday, including a man who attended a mass Muslim gathering linked to nearly two-thirds of the country's 673 infections.

Mydin Managing Director Ameer Ali Mydin told Reuters that supply was adequate at his chain of store but that "people must understand that they cannot be too selective".

The government of Prime Minister Muhyiddin Yassin, who took office only this month, has assured there is enough stock of essentials for the country of 32 million people.

He has shut Malaysia's borders for travellers, restricted internal movement, closed schools and universities and ordered non-essential businesses to stay out.

More in this category: « The EU Closes its Borders to Slow the Coronavirus Spread Manila enters lockdown for month; Duterte mulls curfew on virus »
back to top
INTERNATIONAL NEWS