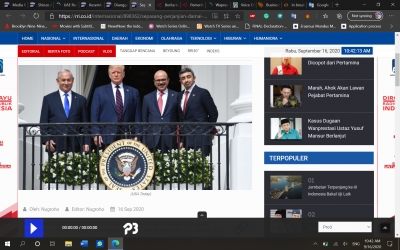 President Donald Trump announced a pair of historic agreements that formalized diplomatic relations between Israel and the two Gulf Arab states in a ceremony on Tuesday local time on the South Courtyard of the White House.

Israeli Prime Minister Benjamin Netanyahu and the foreign ministers of the United Arab Emirates and Bahrain signed the agreement - which is written in English, Hebrew, and Arabic.

"We are here this afternoon to change the course of history," Trump said at the start of the ceremony.

"Together this agreement will be the basis for a comprehensive peace across the region," he said, as quoted by USA Today, Wednesday.

Netanyahu called the agreement a "historical axis" that "marks a new dawn of peace." Foreign ministers from Bahrain and the UAE have both praised the pact.

"For too long, the Middle East has been beaten back by conflict and mistrust, causing untold destruction and thwarting the potential of our best and brightest generation," Abdullatif bin Rashid Al Zayani, Bahrain's foreign minister said.

"Now, I'm sure. We have the opportunity to change that," he added.

Netanyahu and Trump both predict that other Arab countries will soon follow Bahrain and the UAE in normalizing relations with Israel.

Under the agreement, Trump said Israel, the UAE, and Bahrain would set up embassies, exchange ambassadors, and cooperate on issues ranging from trade to health care to security.

"They are going to work together. They are friends," he said.

"Soon there will be other countries that will follow these great leaders." (RRI)