Sudan On Normalization Of Relations With Israel Ultimatum 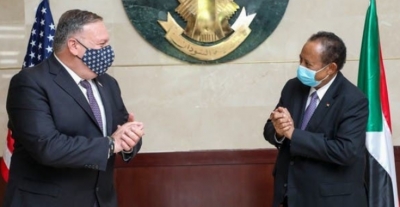 Sudanese officials are discussing plans to normalize relations with Israel after Washington gave Khartoum an ultimatum to respond to it in return for economic aid and lighter sanctions, CNN reported Thursday.

Citing two senior Sudanese officials, CNN said that a meeting was taking place in Sudan after the US issued a 24-hour deadline to agree on a peace with Israel.

According to the report, Washington will reduce Sudan's international debt along with the potential to be removed from the list of state sponsors of terrorism.

Some $ 600 million in aid for food and medicine will be provided to Sudan under the agreement. In addition, the $ 3 billion debt owed by the US in the next fiscal year will be cut, as reported by Al Arabiya, Friday (16/10/2020).

The council will not discuss normalizing relations with Israel in a meeting scheduled to take place on Thursday, the source added. (RRI)

More in this category: « Germany Grappling With Second Wave Of COVID-19 Outbreak Global COVID-19 Death Toll Over 1.1 Million »
back to top
INTERNATIONAL NEWS