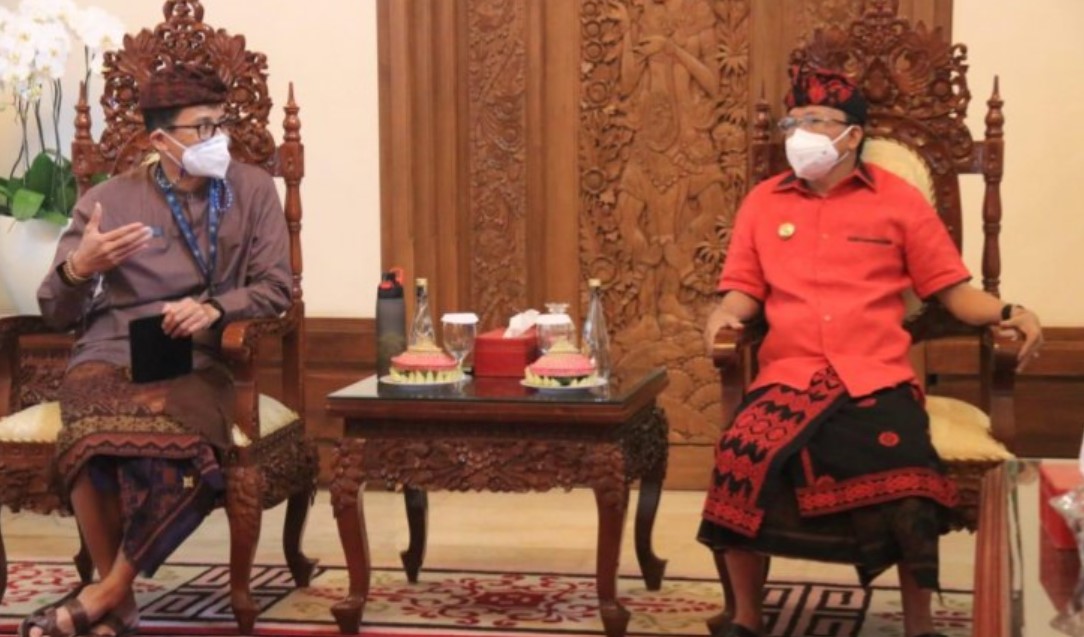 Feb. 12 - Tourism and Creative Economy Minister Sandiaga Uno met with Bali Governor Wayan Koster on Thursday to discuss a soft loan of Rp9.9 trillion for Bali Island's tourism industry and creative economy players this year.“Mr. Minister has shown his strong commitment and care for Bali's tourism industry," Governor Koster told journalists after receiving Uno at his official residence in Denpasar, the capital of Bali province.During their meeting, Koster said they discussed special programs to revive and recover Bali's tourism sector, which has been severely battered by the COVID-19 pandemic, over the short, middle, and long term.The Bali provincial government is supportive of the Tourism and Creative Economy Ministry's programs because they are in line with the wishes of Balinese tourism stakeholders and creative economy entrepreneurs, he added.All programs the ministry has designed and decided can be executed this year, said Governor Koster, who was accompanied by his deputy, Tjokorda Oka Artha Ardana Sukawati (Cok Ace), during the meeting."The sooner the better. By doing so, local tourism industry players and those severely affected by the COVID-19 pandemic can soon be rescued, at least in the short term," he noted.Meanwhile, Minister Sandiaga Uno said he and Governor Koster discussed a soft loan of Rp9.9 trillion for the Balinese tourism industry and creative economy players.The Bali provincial government and Chamber of Commerce and Industry (Kadin)-Bali chapter have proposed a stimulus package of Rp1.5 billion to boost local tourism entrepreneurs' cash flows, he said.The proposed stimulus package is being discussed and included in the national economic recovery program, he said, adding that several labor-intensive programs for reviving Bali's tourism sector have been started.Among them are a jogging track construction project; declaration of 177 tourism villages; Klungkung's waste-management project; and, a program to improve tourist destinations, he said.Those labor-intensive programs, including planned waste-management projects in Kuta and several other tourist sites in Bali, are expected to create job opportunities for lots of people, he added.Indonesia has been striving to win the fight against the COVID-19 pandemic since the government officially announced the country's first confirmed cases on March 2, 2020.The outbreak of the novel coronavirus disease has dragged Indonesia into serious public health and economic crises. Tourism has been among the severely-affected economic sectors in the country, and Bali tourism has been badly battered by the pandemic. (Antaranews)