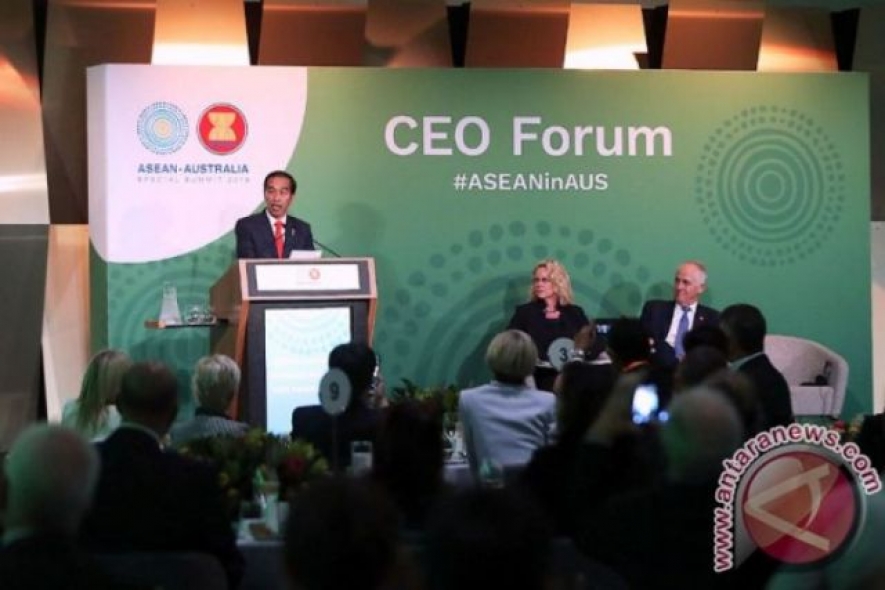 Indonesian President Joko Widodo (Jokowi) has underlined the growth of the middle class in Asia Pacific and Southeast Asia as the economic power in the regions.

"There is significant growth in the middle class in Asia and Asia Pacific. For the time being, we must ignore the number of political issues carried in the front pages of newspapers, because the most important fundamental and historic development currently happening in the world is the growth of the middle class, which is continuing to increase in Southeast Asia," he said, in the presence of company leaders and Australian Prime Minister Malcolm Turnbull at the CEO Forum of ASEAN-Australia Special Summit at International Convention Center, Sydney, Australia, on Saturday.

"There is one important thing that differs in the current cycle of growth of the middle class this time, which is digital economic development, in particular social media," he stated.

Digital economy and social media, according to Jokowi, have brought fundamental changes in consumption pattern.

"The middle class and the youngsters are more interested in experiencing adventure rather than luxury goods. That is what has made tourism industry grow," he remarked.

"Again, 25 percent of new jobs in the world will come from the tourism sector. This is an extraordinary opportunity for ASEAN and Australia to not only promote tourist destinations for the middle class in China and India but also develop it as a big market for domestic tourism industry," he revealed.

Australia can be one of the tourist destinations for development of tourism industry in Asia.

Moreover, he added that ASEAN was just investing a lot in infrastructure development, such as airport, seaport, and railway development, and some ASEAN member countries have even started developing fast train system for the first time.

Jokowi urged Australian businessmen to do business in ASEAN, especially Indonesia. "Now is perhaps a colorful time, in the midst of current global and local political situation, but it also offers an encouraging moment to improve the relations between ASEAN and Australia in the fields of trade, tourism, and investment. I welcome you to ASEAN and Indonesia," he noted.

Sharing Jokowi`s view, Turnbull pointed out that the middle class in Indonesia would grow many folds by 2030, opening more opportunities in investment and trade.

"However, the governments and businessmen must remain committed to rules that have been agreed upon for free and open trade, as opening a market may not happen by itself but needs support and commitment from business and governments. Therefore, I invite all of you to assure that the rules are honored in the region," he stressed. (ANTARA)