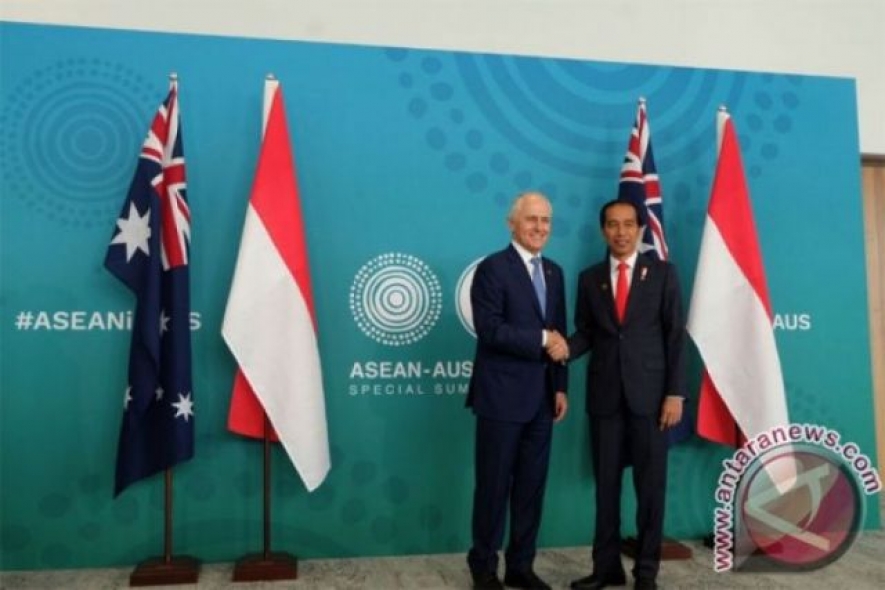 Indonesia and Australia continued to foster their economic ties in the face of shifting of the economic center from the Atlantic to the Pacific region.

Indonesian President Joko Widodo (Jokowi), who is on a visit to Sydney to attend the ASEAN-Australia Special Summit 2018, used the opportunity to have a bilateral meeting with Australian Prime Minister Malcolm Turnbull on Saturday.

On the sidelines of the ASEAN-Australia Special Summit, the Indonesian president addressed a CEO forum at the International Convention Center, Sydney, which was also attended by Turnbull.

At the bilateral meeting, Jokowi and Turnbull discussed the Indonesia-Australia Comprehensive Economic Partnership Agreement (IA-CEPA). The last negotiation on IA-CEPA was conducted on March 6 and 7.

"There is progress, but it has not yet been fully achieved; the final result of the negotiations should ensure benefits for the two countries not only from the commercial aspect but also with emphasis on partnership and cooperation," Jokowi remarked. The president also expected Australia to respond positively to various proposals for cooperation. "The cooperation includes work and holiday visas; higher education and vocational training; professional standards; industrial and agricultural development, including livestock; as well as apprenticeship programs for both students and professionals," he added.

The third bilateral issue discussed was the follow-up of the "Indonesia-Australia Digital Conference." The follow-ups include improving the role of small and medium enterprises (SMEs), startups in developing digital innovations; developing Next Indonesia Unicorn; increasing digital literacy; and smart government initiatives to improve public services.

The meeting, which started at around 11:00 local time, discussed a number of issues, which are results of a 2 + 2 meeting held on Friday (March 16) between ministers of foreign affairs and defense ministers of both countries.

"I hope the signing of a maritime cooperation action plan can be implemented soon, and the two foreign ministers have also exchanged ideas on the concept of Indo-Pacific region architecture," the president stated.

"Who are they in the Asia Pacific? Certainly, there are Asia and India, and other South Asian countries; Middle East to the west of US; China, Korea, and Japan in the north; and Australia in the south. There are 10 member countries of ASEAN blessed with geographical position right in the middle of the gravitation," the Indonesian president revealed. In the meantime, Turnbull praised Jokowi as an important role model. Turnbull heaped praises on the visiting Indonesian leader as a role model in guarding the spirit of diversity. "Jokowi has succeeded in developing multi-culturalism, and this is also being developed in Australia. We are united by political values, democratic freedom, and mutual respect," Turnbull stated.

Turnbull and Jokowi were businessmen before becoming politicians; therefore, they could see the importance of companies, and the government could adopt a policy and issue regulation to support business expansion.

Moreover, according to Jokowi, amid the shifting of the economic center to the Pacific region, the number of middle-class people in the region is also on the rise. "There is significant growth in the middle class in Asia and Asia Pacific. For the time being, we must ignore the number of political issues carried in the front pages of newspapers, because the most important fundamental and historic development currently happening in the world is the growth of the middle class, which is continuing to increase in Southeast Asia," he revealed.

Jokowi underlined the growth of the middle class in Asia Pacific and Southeast Asia as the economic power in the regions.

"The middle class and the youngsters are more interested in experiencing adventure rather than luxury goods. That is what has made tourism industry grow," he remarked.

"Again, 25 percent of new jobs in the world will come from the tourism sector. This is an extraordinary opportunity for ASEAN and Australia to not only promote tourist destinations for the middle-class people in China and India but also to develop it as a big market for domestic tourism industry," he revealed.

Jokowi arrived in Sydney on Friday to attend the 2018 ASEAN-Australia Special Summit, which will be held from March 16 to 18. (ANTARA)