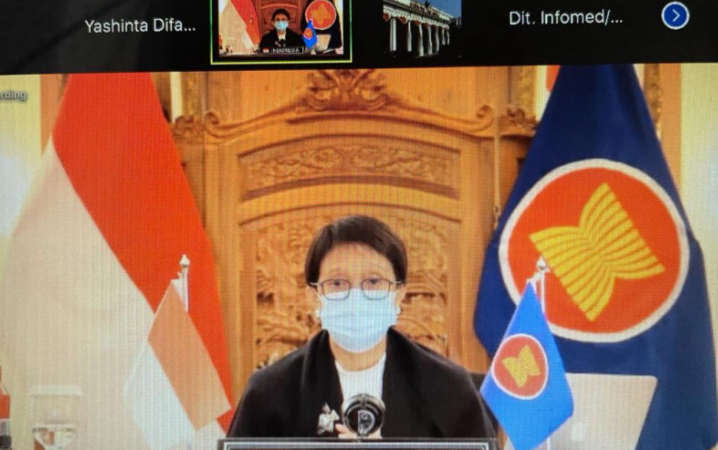 Indonesia has expressed hope that Myanmar will endorse an ASEAN special envoy without delay to mediate a dialog between conflicting parties and ease the crisis in the country."The special envoy must be able to work soon with a clear mandate from ASEAN. The special envoy must also be assured of full access to meetings with various parties as well as (the right) to move from one place to another while performing his duties in Myanmar," Foreign Minister Retno Marsudi said at an online press conference here on Monday.The appointment of a special envoy, which was one of the five points of consensus agreed upon at the ASEAN leaders' meeting to help settle the political crisis in Myanmar, had become a special topic of discussion during the 54th ASEAN Ministerial Meeting (AMM), held virtually from August 2 to August 6, 2021, she pointed out.The implementation of the five-point consensus, which has come to a standstill since it was approved at the ASEAN Leaders Meeting in April 2021, is now under the spotlight as it is seen as "doing no good for ASEAN", she remarked."Frankly speaking, I do not see any significant development in the implementation of the five points of consensus until now," the minister said.Therefore, Indonesia has urged ASEAN to take a firm decision, particularly at the AMM this time, to appoint a special envoy for Myanmar with a clear mandate as well as to ask the Myanmar military to give full access to the special envoy while performing his duties, she said."If this meeting fails to ensure a concrete step to implement the five points of consensus, then Indonesia will propose that the follow up to this consensus be returned to ASEAN leaders (...) in accordance with the ASEAN Charter," she remarked.The AMM kicked off a day after the Myanmar military junta leader Min Aung Hlaing expressed his willingness to accept the appointment of an ASEAN special envoy to find a peaceful resolution to the conflict in the country."Myanmar is ready to cooperate with ASEAN within the framework of ASEAN, including a dialog with ASEAN special envoy for Myanmar," Aung Hlaing said in a televised speech on Sunday.Among the three candidates for the ASEAN special envoy, he said his government has agreed to choose Virasakdi Futrakul, former Thai vice foreign minister and veteran diplomat."But for various reasons, the proposal has just been released and we cannot move forward," Aung Hlaing said.An ASEAN source said Virasakdi has emerged as the strongest candidate for the post. However, no decision has been made because Indonesia is opposed to the nomination, the source added.The other candidates are Hassan Wirajuda, former Indonesian foreign minister, and Razali Ismail, a Malaysian who served as a UN special envoy to Myanmar in the 2000s to facilitate national reconciliation and democratization in the country, according to the source. (Antaranews)