Uno: Contribution Of Culinary Sub-Sector To Revenue High Amid Pandemic 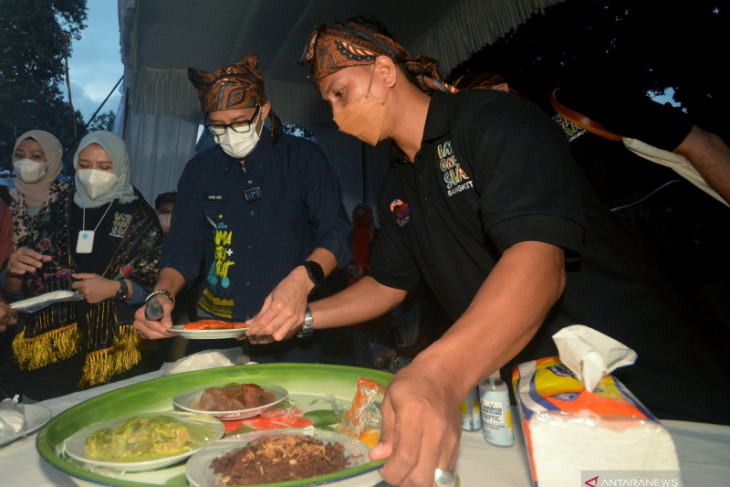 Indonesian Tourism and Creative Economy Minister Sandiaga Salahuddin Uno has said that the culinary creative economy sub-sector contributed as much as 42 percent to the state revenue amid the pandemic.

"Our data show that the tourism sector fell 80 percent in terms of foreign exchange, while its employment declined by almost seven percent. However, the contribution of Indonesia’s creative economy sector ranked as the third largest in the world with Rp1,100 trillion, below the United States and South Korea," he informed in a written statement issued on Tuesday.

"The main contributors are culinary with 42 percent, fashion with 18 percent, and crafts with 15 percent," he said.

Furthermore, the culinary sub-sector has a huge opportunity to advance the tourism industry and Indonesia's creative economy, Uno said.

Hence, the government is encouraging the ‘Indonesia Spices Up the World’ program to globalize Indonesian cuisine, which is rich in spices and distinctive flavors of the archipelago, he said.

"Now we have to start the Indonesia incorporated approach -- as China has 'One Belt One Road', Indonesia has 'Indonesia Spices Up the World'. So, Indonesia has a wealth of spices and food; thus there are many things that we can do holistically by improving the quality and digitization," the minister stated.

The program is also targeted to reach the Indonesian diaspora abroad with approximately four thousand Indonesian restaurants serving as frontliners in Indonesia's culinary promotions, he said.

"From the tongue down to the heart, from the heart go up to the head, then to the wallet for shopping and traveling. Thus, if the culinary industry has gained a spot in the global community, they will consider the tourism sector will see the potential for trade and investment. Thereafter, the economy can finally be driven by opening up as many job opportunities as possible," Uno said.

"Culinary (sub-sector) also has dominance over 20 million jobs in the creative economy sector. Thus, we have to change amid this pandemic to not only survive but also to see opportunities. I am sure that with the transformative shift movement, we can make a transformation for ‘Indonesia Emas (Golden Indonesia) 2045’," he said.

He then lauded the actors in other sub-sectors of the creative economy.

According to the minister, in the difficult pandemic situation, it has turned out that there are opportunities that can be created through the creativity and imagination of the creative economy players which he said he considers to be increasingly limitless.

"Their physical mobility may be limited, but their innovation and creation continue to flow. In the year when our demographic bonus will play an extraordinary role -- we believe that if our trajectory can be facilitated – the creative economy will be our ability to adapt in the post-pandemic era to get Indonesia to become the world’s fourth largest economy in 2045," he said.

For developing the tourism and creative economy sector, Indonesia will continue to strive to improve its human resources through innovation, adaptation, and collaboration, the minister said.

Innovation comprises the utilization of big data, he added. Uno said he hopes data will help the government to make appropriate policies which are relevant to the situation.

"For instance, the tourism sector will shift to become more personalized, customized, localized as well as smaller in size. The movements that the public currently discerns regarding the Cleanliness, Health, Safety, and Environment Sustainability; digitization; and how health tourism becomes the main choice for Indonesian tourists will also be our focus in future," he added. (Antaranews)