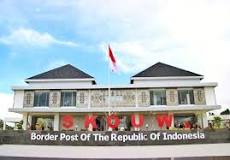 Skouw hamlet is located at the border of Indonesia-Papua New Guinea, precisely at Muara Tami district, Jayapura city, Papua, Indonesia. Muara Tami district consists of 3 hamlets, namely Skouw Yambe, Skouw Sae, and Skouw Mabo. From Jayapura city, the distance is around 46 kilometers or it takes around 1 and a half hour until 2 hours by car. Skouw hamlet is hot and dry. Thus, many people choose to move to Jayapura city. But, Skouw hamlet scenery has changed to be beautiful. The post of state’s border is more luxurious and the border’s gateway becomes favorite location of native people or tourists who visit the place. Besides selfie at the border’s post and gateway, there is another activity which can be conducted at Skouw hamlet. At Skouw Yambe hamlet, you can see turtle’s conservation. Since the mid 2017, the government of Jayapura city has made Skouw Yambe hamlet to be turtle’s tourism object. In additional to preventing the turtle’s extinction, it is also to increase local economy. Today, tourists who visit can see and cultivate the turtle beginning from catching process, spawning, hatching until releasing to the ocean.

More in this category: « Menganti Beach,Kebumen, Central Java Arja Dance From Bali »
back to top
Home