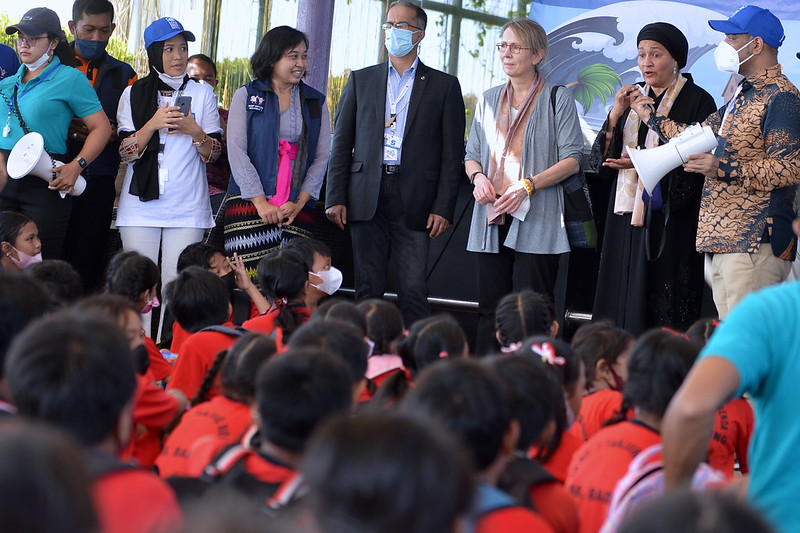 Students and teachers of an elementary school in Tanjung Benoa, Bali, held a tsunami drill, on Tuesday, May 24. Upon the tsunami alert, they automatically headed to a designated temporary evacuation site (TES). This training is part of the preparatory sessions before the 7th Global Platform for Disaster Risk Reduction (GP2022). The training vividly show that meaningful participation from local communities is vital for a functional evacuation plan.

The Head of Indonesia’s National Disaster Management Authority (BNPB), Lt. Gen. Suharyanto, reminded all training participants that Indonesia is one of the most disaster-prone countries.

"Indonesia is prone to all [kind of] disasters," said the Head of BNPB Lt. Gen. Suharyanto when
joining the earthquake and tsunami simulation.

Amina J. Mohammed, the UN Deputy Secretary General, highlighted the importance of early actions to mitigate disaster impacts during her presence in the simulation. By nature, disasters threaten the achievement of Sustainable Development Goals (SDGs).

“Disasters pose a major threat to the achievement of the Sustainable Development Goals. They have the potential, in minutes and hours, to wipe away the results of years and decades of development work. Drills like today’s are critical to this early action. Because all of us have a responsibility to protect each other, to “stop the spiral” of disaster destruction, and to ensure we’re as prepared as we can be,” said Amina Mohammed.

Meanwhile, Asako Okai, the UN Assistant Secretary-General and the Director of the UNDP Crisis Bureau explained about UNDP’s regional initiatives and its regional partners.

“Together we have identified the most tsunami vulnerable schools, reviewed and updated school preparedness plans, conducted evacuation drills, and advocated for the inclusion of tsunami preparedness in school curriculum. This initiative ensures that early action is taken in response to early warning, and engage communities, especially the most affected or vulnerable, in the process," she said.

According to a release received by Voice of Indonesia on Wednesday (25/05/22), since 2017, the UNDP, with the support from the Japanese government, has conducted tsunami preparedness drills for students residing in coastal areas across 18 countries in Asia Pacific, including Indonesia. The drill trains residents how to reduce disaster risks and avoid disaster consequences. The GP2022 creates an opportunity for Indonesia to showcase our local wisdom on DRR and national best practices in achieving sustainable resilience.

For those living in tsunami-prone areas in Bali, the most reasonable strategy is running to a high-rise building with three floors at minimum. Tanjung Benoa village had already signed agreements with seven hotels nearby to convert the buildings into temporary evacuation sites for the community.