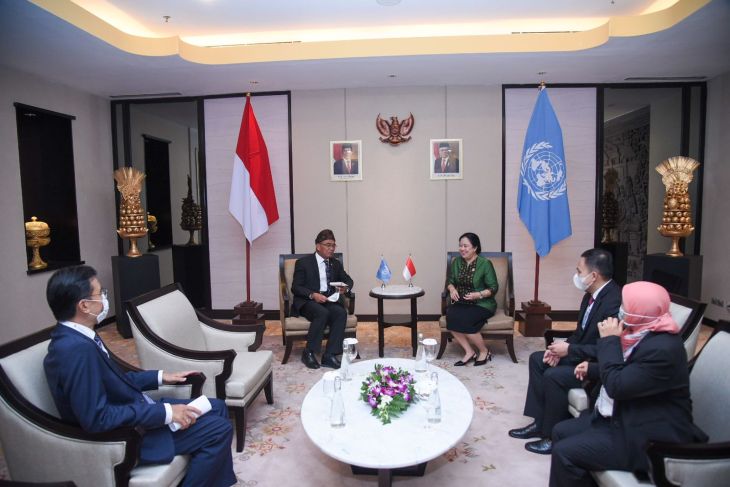 The COVID-19 pandemic, which is still looming in several parts of the Earth, is a reminder that international cooperation is necessary for addressing global problems, House Speaker Puan Maharani has said."The COVID-19 pandemic has become a wake-up call (that has emphasized) the importance of collective efforts and work in dealing with global problems," she said at the 7th Global Platform for Disaster Risk Reduction (GPDRR) in Bali on Thursday, according to a press statement issued the same day.The GPDRR is a special global meeting held to discuss issues related to disasters. The United Nations conducts it every two years, and this year, Indonesia has been chosen as the host of the event.According to Maharani, the international meeting is a symbol of joint efforts for instilling commitment among the Earth’s inhabitants.Commitments between nations and countries have often been enabled through various forums, collaborations, and meetings. In fact, the commitment to focus on common interests and cooperation has been in place since the 1955 Asian-African Conference."Joint efforts are needed for solving global problems such as food (scarcity), energy, clean water, sanitation, and nature conservation," she said.Global economic competition and industrial development have resulted in a gap between states in terms of nature exploitation, technology utilization, and the development of processes related to the environment, such as infrastructure, housing, irrigation, agriculture, and forestry, among others.However, there have also been differences in progress among countries, leading to different attitudes toward nature exploitation for sourcing state income.Maharani said she is hopeful that in the future, every country would be committed to building people-centered disaster resilience.This could be initiated by raising awareness and commitment to preserving and supporting nature and the environment."In the next step, a collective (commitment) is required for building an eco-friendly world order for industrial ecosystems and an economy," she added.Current ConcernAt the meeting, Maharani also brought up the Bandung Declaration of the Ten Principles of 1955, which underlined the aspiration of every nation to be free and prosperous. However, she said she was concerned since until now, issues such as food shortages, scarcity of clean water, environmental damage, and environmental pollution have remained.She called for a change in the thought paradigm to ensure people do not keep reaping goods from nature, but also give back to nature to help restore the condition of the ecosystem to its ideal state.She also informed that parliaments in Indonesia and various parts of the world have grown increasingly aware of their strategic power or contribution to improving international collaboration to adapt to and mitigate climate change.This environmental issue has become one of the common concerns, including at the Inter-Parliamentary Union (IPU).At the 144th Inter-Parliamentary Union Assembly hosted in Bali from March 20 to 24, 2022, she had chaired the events that had led to the approval of the Nusa Dua Declaration on climate change adaptation and mitigation efforts.In the Nusa Dua Declaration, the world's parliaments had reiterated their commitment to reinforcing national actions to pursue the achievement of the global goal of net-zero emissions."As well as support for climate finance for developing countries of US$100 billion, which must be met immediately," Maharani said.At the regional level, the Association of Southeast Asian Nations (ASEAN) Inter-Parliamentary Assembly (AIPA) has also pushed for collaboration to realize the ASEAN Vision 2025 on Disaster Management.Maharani once more stressed the need for realistic and real forms of cooperation among nations to address the core issues of disaster mitigation, such as managing global economic competition and industry, which could contribute to environmental recovery.“The industry must not only take from nature but (it) also must be able to (facilitate) its recovery; a recovery program that is carried out in a systematic and extensive manner,” she added.  (Antaranews)