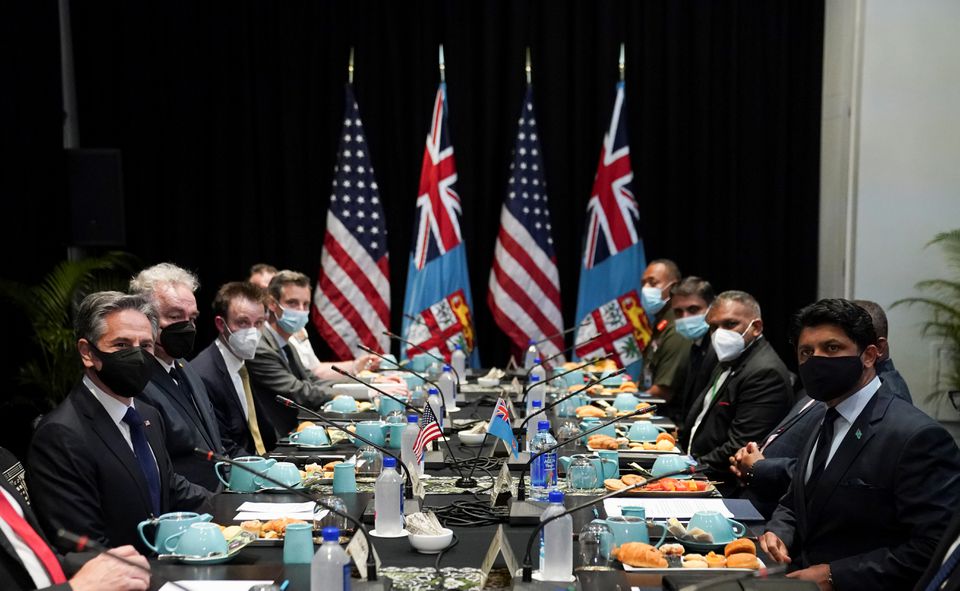 Fiji is joining U.S. President Joe Biden's Indo-Pacific Economic Framework (IPEF), the White House said on Thursday, making it the first Pacific Island country in the plan that is part of a U.S. effort to push back on China's growing regional influence.

The announcement came as China's Foreign Minister Wang Yi began a sweeping tour of Pacific Island countries – including Fiji – a region that is becoming an increasingly tense front in the competition for influence between Beijing and Washington.

Wang arrived in the region this week seeking a 10-country deal with island nations on security and trade that has unnerved the United States and its Pacific allies. read more

The White House welcomed Fiji as a founding member of IPEF, which it said now includes countries from Northeast and Southeast Asia, South Asia, Oceania and the Pacific Islands.

"Across geography, we are united in our commitment to a free, open, and prosperous Indo-Pacific region," National Security Adviser Jake Sullivan said in a statement, underscoring Fiji's valuable perspective in the fight against climate change.

With Fiji's addition, IPEF now represented the full regional diversity of the Indo-Pacific, he said.

Biden officially launched IPEF earlier this week during his first trip as president to Asia, which has craved further U.S. economic engagement.

Fiji is the 14th country to join IPEF talks, which exclude China.

Chinese foreign ministry spokesman Wang Wenbin, asked about Fiji signing up to IPEF, told reporters in Beijing on Friday that the Asia-Pacific "should not become a geopolitical chessboard". read more

Washington has lacked an economic pillar to its Indo-Pacific engagement since then-President Donald Trump quit a multinational trans-Pacific trade agreement, in part out of concern over U.S. jobs.

U.S. officials have said IPEF will include enforceable agreements, though trade experts have expressed skepticism about the plan, particularly over concerns that the United States is unlikely to offer increased market access. (Reuters)