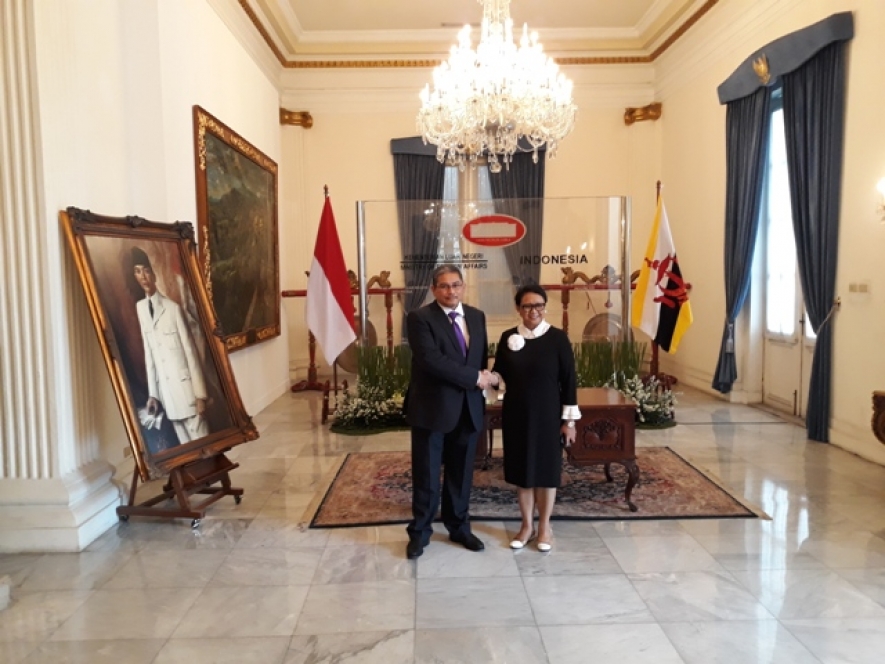 Indonesian Minister of Foreign Affairs Retno Marsudi held a bilateral meeting with Minister of Foreign Affairs and Trade II of Brunei Darussalam, Erywan Yusof at Pancasila Building, Ministry of Foreign Affairs, Jakarta, Friday, July 20th, 2018. The meeting was held in the 4th Joint Committe Bilateral Cooperation for Bilateral Cooperation (JCBC) corridor. Foreign Minister Retno Marsudi discussed several regional issues in Southeast Asia, including the preparation of ASEAN Foreign Ministers Meeting / Post Ministerial Conferences (AMM / PMC) which will be held in Singapore in the near future. At the meeting the two Foreign Ministers also mambahas Indonesia Indo Pacific concept which in April became one of the discussion at the ASEAN Summit.

“For regional and international issues, we talked about the preparation of AMM / PMC meeting which will be held in Singapore at the end of this month and early next month. Indonesia highly appreciates Brunei Darussalam's support for the Indonesian paper concept on Indo Pacific which puts great emphasis on ASEAN centrality,” Retno Marsudi said.

The concept of Indo-Pacific is a geopolitical cooperation that connects between two oceans namely the Indian and Pacific Oceans where the point is in Indonesia. This makes Indonesia and ASEAN as a region region become the main players in this geopolitical cooperation. On the same occasion, Foreign Minister Retno Marsudi also again conveyed his appreciation to Brunei Darussalam which has provided support to Indonesia to step forward as a non-permanent member of the United Nations Security Council for 2019-2020 period representing the Asia and Pacific region. In addition, Foreign Minister Retno Marsudi also invited Sultan of Brunei Darussalam, Sultan Hassanal Bolkiah to attend the ASEAN Leaders Gathering Meeting which will be held in Bali, in October. (VOI / Rezha/RHM)