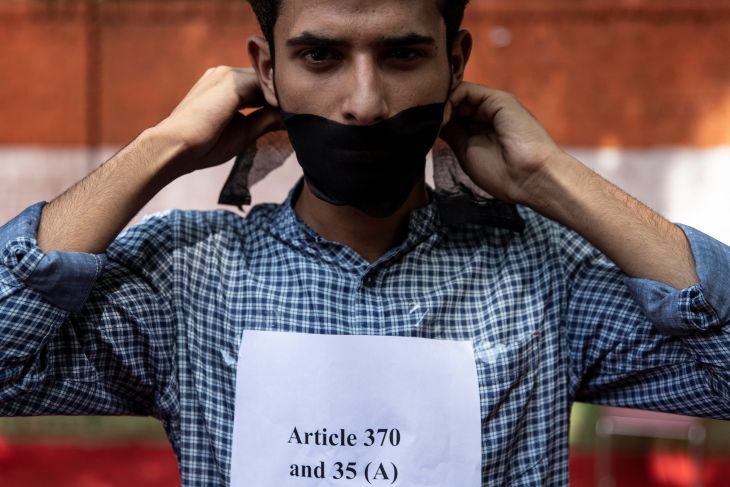 The Jammu and Kashmir dispute between Pakistan and India is recognized by the United Nations Security Council (UNSC), a researcher from Strategic Vision Institute (SVI)-Islamabad, Muhamad Hanif, has said.Both countries fought their first war over the accession of the then princely state of Jammu and Kashmir in 1947–48, when India managed to occupy a major chunk of Jammu and Kashmir through military intervention, Hanif observed in a statement received on Friday.When the Pakistani army countered the Indian military offensive, on January 1, 1948, under Article 35 of the UN Charter, India referred the Kashmir dispute to the UN Security Council.On January 20, 1948, the UNSC passed Resolution 39, calling for an urgent investigation into the dispute by the newly established UN Commission for India and Pakistan (UNCIP) to prevent a major war.On April 21, 1948, the UNSC adopted Resolution 47, calling for a ceasefire and deciding that the accession of the state to Pakistan or India would be done through a free and impartial plebiscite, which both Pakistan and India agreed to.The resolution also instructed the UNCIP to visit the subcontinent and mediate and help the two countries to hold a plebiscite, Hanif said.However, in later years, India foiled all UNSC and UNCIP efforts to hold the plebiscite on one pretext or the other, as India knew that if an impartial plebiscite was held, then the Muslim majority population of Jammu and Kashmir would vote for accession to Pakistan.In response to India’s long intransigence, since 1989, Hanif noted that the people of Occupied Jammu and Kashmir have launched a peaceful freedom struggle, with India deploying more than 700 thousand security troops to crush it. The security forces have committed human rights violations in Kashmir Valley with full impunity under the protection of draconian laws like the Armed Forces Special Powers Act (AFSPA) and Public Safety Act (PSA).As per Kashmir Media Service (KMS), since 1989, around 100 thousand Kashmiris have been killed by Indian forces in Indian-occupied Kashmir (IOK).Of them, more than 7,120 have been killed in Indian custody. Further, 109,200 structures have been destroyed, 22,896 women have been widowed, 107,754 children have been orphaned, and more than 11,110 women have been raped by Indian forces.As of January 2019, 8,500 Kashmiri youth have been injured by pellet gunshots. Of these, 207 have been blinded in one eye, while 130 have been gone completely blind.Crossing all limits, on August 5, 2019, the Narendra Modi government abrogated Articles 35-A and 370 of India’s Constitution and took away the autonomy of Jammu and Kashmir, dividing the state into two union territories.India has converted a UNSC-declared disputed territory between Pakistan and India into its integral part, which is in total violation of UNSC resolutions on Kashmir.To pre-empt Kashmiris’ reaction, India has increased its security forces from 700 thousand to more than 1.1 million and imposed a curfew in the Kashmir Valley, which has remained in place. Internet services in Kashmir have also been blocked and all Kashmiri leaders/youth have been jailed.When Pakistan referred the matter to the UNSC in August–September 2019, except for China, other members holding the veto power did not even condemn Indian actions, though they asked India and Pakistan to resolve the Kashmir dispute bilaterally.The UNSC also could not agree on adopting a binding resolution to restrict India from unilaterally changing the status of the disputed Jammu and Kashmir by dividing it into two union territories and ending restrictions and violations in Kashmir, he said.In view of the situation prevailing in India-occupied Jammu and Kashmir and to draw the attention of the international community and UNSC veto members toward India’s barbarism, as announced by the Prime Minister of Azad Jammu and Kashmir, Kashmiris living on both sides of the LoC (line of control) and across the world will observe Black Day on August 5, 2022, by organizing protest processions and programs against the abrogation of Article 370 of the Indian Constitution, the revocation of the special status of Jammu and Kashmir, and the violations committed in Kashmir Valley.In this context, he said, the Azad Jammu Kashmir PM will lead the protest procession in Muzaffarabad and present a protest memorandum to a UN observer mission to draw the attention of the UNSC toward the genocide being committed by Indian forces in occupied Kashmir.The protest procession will also urge UNSC members to adopt a fresh binding resolution on Kashmir and ask India to lift restrictions, end violations in Kashmir, and reverse the steps it took on August 5, 2019.India should also be bound to either prepare for holding a plebiscite in Jammu and Kashmir or a dialogue with Pakistan without any preconditions to resolve the Kashmir dispute within the next five years at the most. (Antaranews)