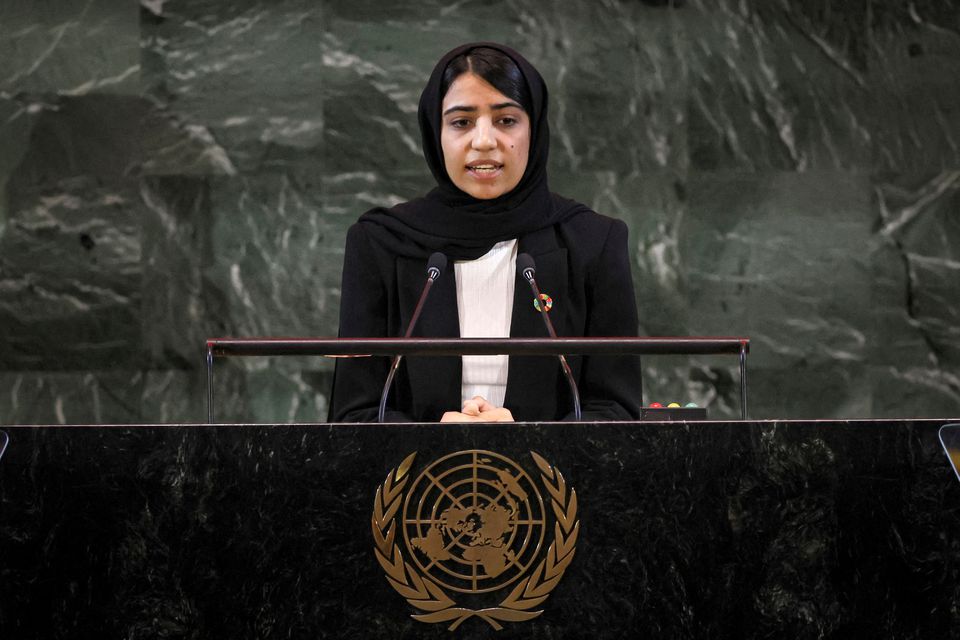 After pleading with world leaders at the United Nations to protect the education and rights of women in Afghanistan a year after the Taliban took over, Somaya Faruqi, former captain of the Afghan girls robotics team, broke down in tears backstage.

"I was in classroom last year, but this year girls are not in classroom. Classrooms are empty, and they are at their homes. So it was too hard to control myself, control my feelings," Faruqi, 20, told Reuters.

Faruqi, who now attends the Missouri University of Science and Technology, left Afghanistan in August last year, when the Islamist Taliban seized power and the United States and allies withdrew forces after a 20-year war.

Speaking at the United Nations in New York this week as world leaders gather for the high-level meeting of the U.N. General Assembly, she urged them to unite and demand the reopening of girls' schools and protection of their rights.

"Most of you know what exactly needs to be done. You must not make small, stingy and short-term pledges, but commit to uphold the right to complete education and close the funding gap once and for all," Yousafzai said on Monday. Last year, she pleaded with the world not to compromise on the protection of Afghan women's rights following the Taliban takeover.

The Taliban have said women should not leave the home without a male relative and must cover their faces, though some women in urban centers ignore the rule.

In March, the Taliban made a U-turn on a promise to open girls' high schools. Most teenage girls now have no access to classrooms and thousands of women have been pushed out of the workforce because of tighter restrictions and Afghanistan's economic crisis, international development agencies said.

The Taliban say they respect women's rights in accordance with their interpretation of Islamic law and that since March they have been working on a way of opening girls' high schools.

At the Transforming Education Summit on Monday, U.N. Secretary-General Antonio Guterres appealed to the Taliban to "lift all restrictions on girls’ access to secondary education immediately."

"Girls' education is among the most important steps to deliver peace, security and sustainable development, everywhere," said Guterres.

U.S. Secretary of State Antony Blinken on Tuesday opened the Alliance for Afghan Women’s Economic Resilience, a partnership between the State Department and Boston University aimed at advancing Afghan women's entrepreneurship and educational opportunities and expanding workplace opportunities, both in Afghanistan and elsewhere.

"Women, no matter where they live, should have equal rights in every facet of their lives," Blinken said.

"This should be, in the year 2022, self-evident to everyone on this planet. But of course, it’s not, and we have to fight for it. We have to struggle for it every single day," Blinken added.

Rina Amiri, U.S. Special Envoy for Afghan Women, Girls and Human Rights, said the initiative would face a lot of challenges. Instability, a lack of security and financial chaos will weigh on any attempts to support women's re-entry into Afghan society.

"What we want to show is that there's resilience," she said.

Fereshteh Forough, CEO of Code to Inspire, the first coding school for women and girls in Afghanistan, said at the alliance's event that she had to close her school and move to online learning after the Taliban took over.

She broke down in tears as she said that 80% of the students were back to school remotely, and that as of Monday, the school was able to get a permit from the Taliban to reopen conditionally.

"We were able to get 300 girls to get an entrance exam and come to our graphic design school. It’s just unbelievable how difficult it's been this year," she said, in tears.

"The text messages I received from the girls, it was heartbreaking." (Reuters)

More in this category: « Nepal in fresh political conflict as president declines to sign citizenship law Japan weighs plan for ban on hotel guests without masks -media »
back to top
Home
//http://180.250.107.174:1935/voinews/stream/playlist.m3u8