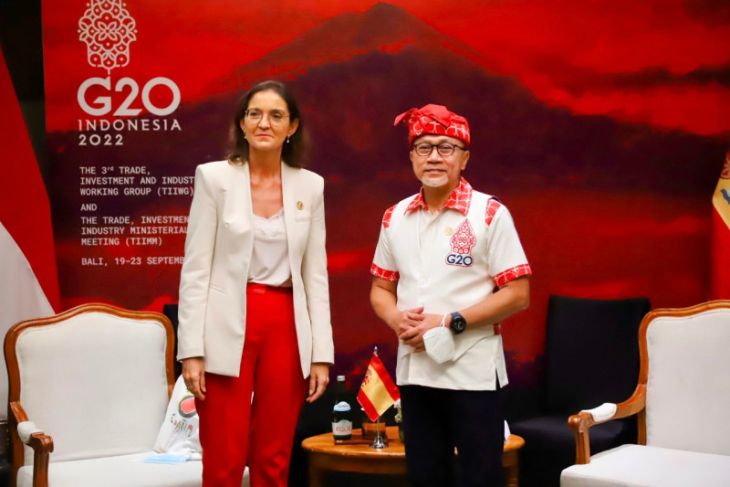 Indonesian Trade Minister Zulkifli Hasan discussed cooperation opportunities with his Spanish counterpart, María Reyes Maroto Illera, on the sidelines of the 2022 G20 Trade, Investment, and Industry Ministerial Meeting (TIIMM)."There are great (cooperation) potentials that can be explored to increase trade and investment between the two countries, among others, in the fisheries and tourism sectors," the Indonesian minister stated here on Wednesday evening.The TIIMM is organized under the Sherpa Track as a follow up to the works of the G20 Trade, Investment, and Industry Working Group that addresses trade and investment issues as well as encourages G20 countries to bolster global trade and investments.The TIIMM is taking place in Bali on September 21-23, 2022.The two ministers agreed on the importance of increasing interactions between business actors of the two countries to optimize the collaboration potentials.Hence, Hasan has invited Spanish business players to partake in the largest business-to-business trade exhibition in Indonesia -- the 37th Trade Expo Indonesia (TEI) -- which will be held on October 19-23, 2022.The two ministers also supported that negotiations on the Comprehensive Economic Partnership Agreement (CEPA) between Indonesia and the European Union (EU) be concluded as soon as possible.The agreement is expected to facilitate mutually beneficial economic cooperation between Spain -- as a member of the EU -- and Indonesia.Furthermore, Hasan and Maroto spoke about the important role of the G20 in finding solutions to address current global challenges. The results of the 2022 G20 TIIMM are expected to help expedite recovery of the global economy.During the period from January to July 2022, the total trade between Indonesia and Spain reached US$1.6 billion, an increase of 6.71 percent year-on-year (yoy).Meanwhile, the total trade between Indonesia and Spain in 2021 was valued at US$3 billion, up 53.83 percent as compared to the figure in 2020.Indonesia's export value to Spain in 2021 amounted to US$2.3 billion, an increase of 55.07 percent yoy, while the value of imports was US$684.1 million, up 49.75 percent. Hence, Indonesia recorded a trade surplus of US$1.7 billion.Indonesia's main export commodities to Spain were palm oil, copper ore and concentrates, monocarboxylic fatty acids, steel, as well as animal and vegetable fats.Meanwhile, Indonesia's main import commodities from Spain were human and animal vaccines, medicines, food coloring, recycled paper or cardboard, as well as perfumes and fragrance. (antaranews)