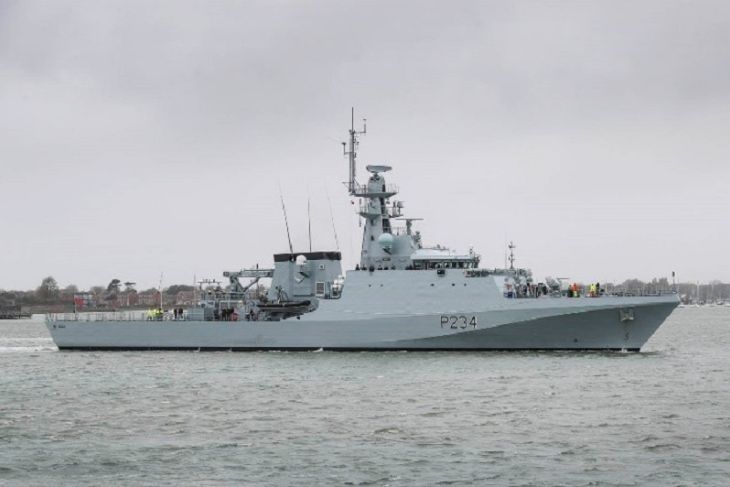 His Majesty's Ship (HMS) Spey, an offshore patrol vessel that is also Britain's newest, visits Bali on September 30-October 2, 2022, for cultural exchanges with the Indonesian Navy and a Balinese dancing club's local youth."HMS Spey is on a five-year operation in the Indo-Pacific region alongside her sister ship, HMS Tamar. Working alongside partners and allies, the ship is helping tackle security challenges and support nations against the impacts of climate change," the British Embassy in Jakarta noted in a statement on Friday.British Ambassador to Indonesia and Timor Leste Owen Jenkins said that building strong and enduring partnerships with Indonesia is at the heart of the UK’s mission."HMS Spey is a physical demonstration of the UK’s commitment to deepening diplomatic, economic, and security ties with Indonesia and other countries in the Indo-Pacific region," Jenkins stated.According to the British Embassy, HMS Spey is the "greenest," most environmentally friendly ship in the Royal Navy due to the catalytic converters fitted to the funnel uptakes to reduce CO2 emissions."I am very pleased to say that HMS Spey is the greenest ship in the Royal Navy and has been working closely with countries across this region on important areas, such as climate change," Ambassador Jenkins said."The technology deployed onboard is a great example of sustainable energy transition, one of the Indonesian Presidency’s G20 priorities, which the UK fully supports," he affirmed.HMS Spey recently conducted patrols to combat illegal, unregulated, and unreported fishing as well as environmental surveys.The ship’s arrival to Bali was led by Executive Officer Lieutenant Commander Bridget Macnae. Lieutenant Commander Macnae is scheduled to meet with Bali Governor I Wayan Koster and Udaya Military Commander Major General Sonny Aprianto as part of a courtesy call.The crew of HMS Spey will also have the opportunity to conduct cultural exchanges with the Indonesian Navy, as they will be introduced to Indonesia’s popular line dance forms of Poco-Poco and Maumere.Both dances originated in Indonesia -- from Maluku and East Nusa Tenggara -- and have since gone global, thereby becoming one of the most popular dance forms to unite people of all backgrounds."I hope this would bring our navies close together, as they enjoy the beauty and cultural abundance that Bali offers," Lieutenant Commander Macnae said."This visit is also an opportunity for us to utilize the logistics services in Bali, taking on the fresh stores and fuel we need to keep HMS Spey at sea on her mission. We are very grateful for the hospitality shown by the Indonesian people," she stated.HMS Spey's visit to Bali is expected to further strengthen relations between the British and Indonesian navies. (Antaranews)