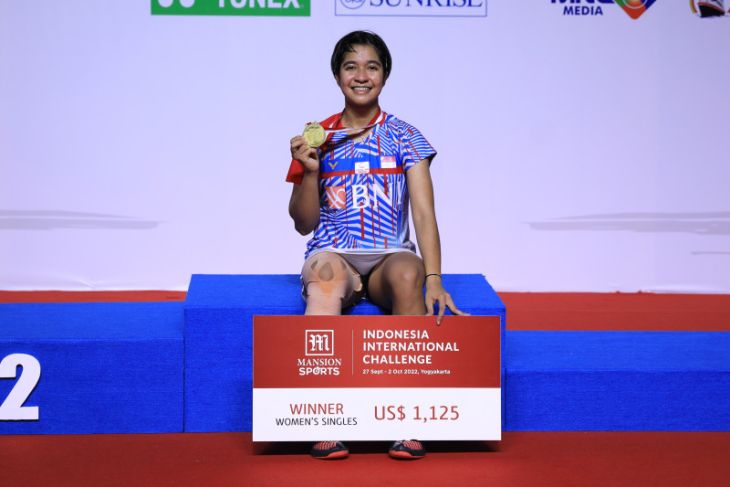 Indonesia won three titles at the 2022 Indonesia International Challenge badminton championship held in Yogyakarta from September 27 to October 2.Ester Nurumi Tri Wardoyo emerged as the champion in the women's singles in the 2022 Indonesia International Challenge after defeating her training colleague at the Cipayung Training Center Komang Ayu Cahya Dewi."Today, I just played ambitiously without thinking too much about the playing pattern, especially in the third game. I just follow the shuttlecock wherever (it goes) and did not want to lose," she noted in a statement, Sunday."This (champion title) certainly adds confidence," she remarked while affirming that this victory would serve as her capital for the 2022 Junior World Championship.Wardoyo beat Dewi in three games matches that ended with the score 15-21, 21-14, 21-15.The victory helped Wardoyo to secure her first title in a senior-level tournament as well as a cash prize of US$1,125.Indonesia's second champion title in the 2022 Indonesia International Challenge was bagged by the women's doubles pair Anggia Shinta Ananda and Putri Larasati, who defeated Taiwan's representatives, Sung Yu-Hsuan and Wang Szu-Min, with the score of 21-19, 22-20.This became their first international title since the two were paired this year.Ananda and Larasati debuted in the 2022 Indonesia Masters in Jakarta, last June. However, they were immediately eliminated after the first round of the Super 500 level tournament."I feel really happy since this is my second international tournament with Laras, and we can immediately win a title," Ananda stated."We did not expect that we could enter the final since we were paired up recently. I am happy that I can also bring Laras to win a title," she remarked.In the mixed doubles final, the All Indonesia Final was won by Akbar Bintang Cahyono and Marsheilla Gischa Islami, who took down Adnan Maulana and Indah Cahya Sari Jamil, with the score 21-17, 14-21, 21-16. (Antaranews)