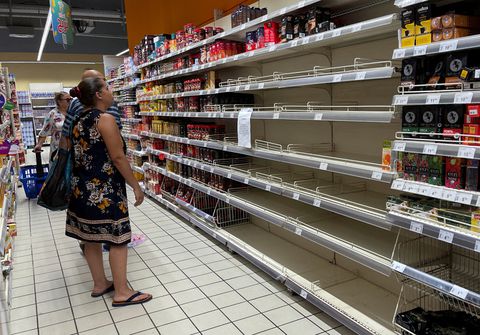 Tunisia's powerful UGTT labour union has no deal with the government on reforming subsidies and publicly owned companies and will lead street protests over any "painful" changes, it said on Monday, potentially complicating foreign bailout talks.

The government is in talks with the International Monetary Fund (IMF) for a rescue package that could unlock further bilateral aid for Tunisia to help it avert a looming crisis in public finances.

The IMF wants the UGTT on board with economic reforms needed to secure the deal, but so far the union has only struck a formal agreement with the government on public sector wage increases, but not on subsidies or state companies.

"When there are painful choices, we will be with our people in the front lines of the struggle and in the streets," UGTT leader Noureddine Taboubi said in a speech.

He confirmed the recent wages deal did not cover any agreement on subsidies or restructuring state companies - the two other main areas of fiscal consolidation sought by lenders.

Tunisia's central bank governor and its finance and economy ministers are scheduled to meet the IMF in Washington next week for talks on a loan programme that the government hopes to secure this month.

Price increases and food shortages have already spurred some protests in recent weeks against the government, coming after years of low growth and perceived declines in public services that have infuriated many Tunisians.

The UGTT, which says it has more than a million members and has carried out major strikes, has consistently opposed big state spending cuts in recent years, arguing the government should instead tackle corruption and tax evasion.

Tunisia is meanwhile also dealing with political turmoil as major parties reject President Kais Saied's introduction of a new constitution, approved in July in a referendum with low turnout, that expands his own powers. (reuters)

More in this category: « Polish foreign minister signs diplomatic note to Germany on WW2 reparations Nepal coalition to aim for growth if returned to power, finance minister says »
back to top
Home
//http://180.250.107.174:1935/voinews/stream/playlist.m3u8