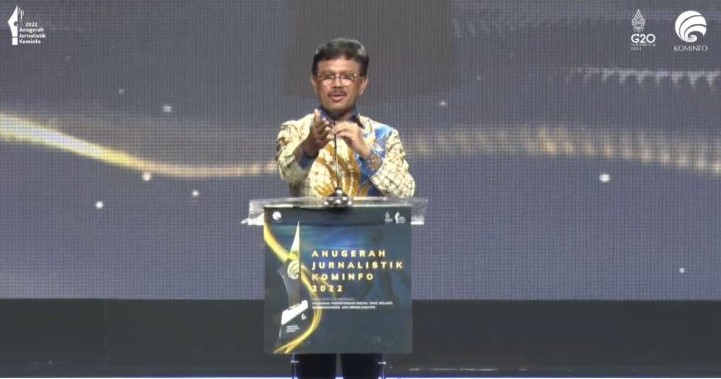 The advancement of digital technology has affected various aspects of life, including the journalism industry, according to Minister of Communication and Information Johnny G. Plate."The journalism world is no exception to those affected by the digital technology extensification, for instance, (it has led to) changes in media landscape variations, as well as the business model, norms, ethics, and coverage work," Plate noted while opening the ministry's 2022 Journalism Awards, which were broadcast on the ministry’s social media on Wednesday.Digital technology, including tools for transcribing interviews and software for analyzing pictures and videos, has supported the work of journalists, the minister said, adding that such technology, besides making work more efficient, can also help media companies optimize their budgets and variables.Media companies can also utilize artificial intelligence to detect trending topics and breaking news, he said."Technology has also allowed fact-checking to detect whether the news is true or false," he highlighted.Plate pointed out that the artificial intelligence technology utilized by TheAssociated Press has helped it generate 40 thousand news reports annually.Technology has created new opportunities for the journalism industry and media companies to help disseminate news to the public more effectively, the minister said.Despite its benefits, he underlined that technological advancement also poses new challenges for journalists in ensuring the quality of news content and the accuracy of information."Technological advancement must be balanced by dexterity and speed to adapt," he said.Media companies must adapt themselves to the change to ensure technology becomes the accelerator and enabler of journalistic work, he added.The ministry's journalism award is presented to members of the press community reporting on technology, telecommunication, and the digital world. The award is given out in five categories: online media, printed media, radio, television, and photography. (Antaranews)

More in this category: « Indonesia gets solar PV lab equipment from Switzerland Papuans urged to fill govt vacancies in new provinces »
back to top
Home
//http://180.250.107.174:1935/voinews/stream/playlist.m3u8