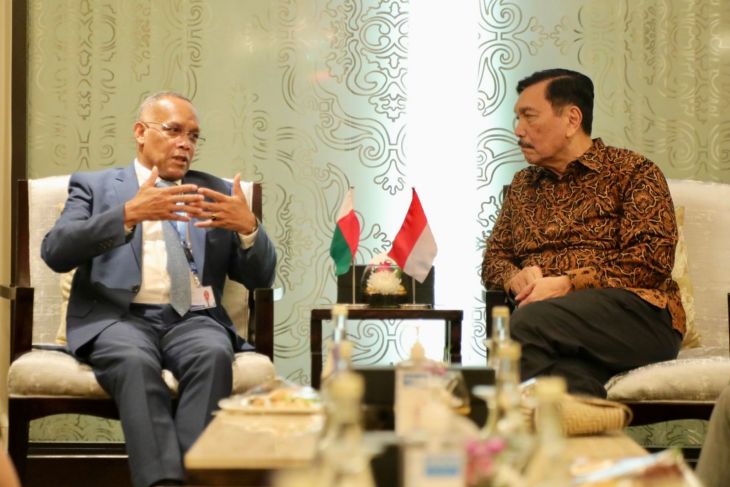 Indonesian Coordinating Minister for Maritime Affairs and Investment Luhut Binsar Pandjaitan discussed several maritime security issues with Malagasy Defense Minister Leon Jean Richard Rakotonirina on the sidelines of the Archipelagic and Island States (AIS) Forum.During the discussion held in Bali, on Monday (December 5, 2022), Madagascar said that Indonesia's leadership was deemed important in maintaining security of the maritime area in the Asia-Pacific Region, especially in the Indian Ocean, according to a statement received on Tuesday."Certainly, it is Indonesia's commitment to continue to protect the Indian Ocean as a joint strategic area. Indonesia's leadership in the AIS forum is highly expected by other countries, including Madagascar," the Indonesian coordinating minister noted in the statement.Pandjaitan remarked that Indonesia had also incessantly striven to deal with various global issues at the 2022 G20 Presidency.Thus, Indonesia will continue to encourage cooperation among developing countries through Emerging Economies Cooperation as a follow-up to the series of meetings at the G20 Summit, he has stated."It will strengthen South-South cooperation, especially in the strategic industry, trade, and infrastructure sectors," Pandjaitan said.In addition to discussing strategic maritime issues, the two officials explored opportunities for cooperation in the sustainable management of forest and marine resources as well as capacity building of human resources on maritime resource management.Madagascar views Indonesia as being quite capable of developing the maritime sector, so the African country is keen to increase bilateral cooperation in maritime education."Indonesia has been very advanced in this sector. We (Madagascar) really need to collaborate on education about the maritime sector," Rakotonirina, who also served as interim foreign affairs minister of Madagascar, stated.The political relationship between Indonesia and Madagascar is unique since there is also a psychological-historical relationship between the two countries.Moreover, Rakotonirina was fluent in Indonesian during the bilateral meeting, considering that he was of Indonesian descent and had spent several years to learn in Indonesia as a recipient of a scholarship. (Antaranews)