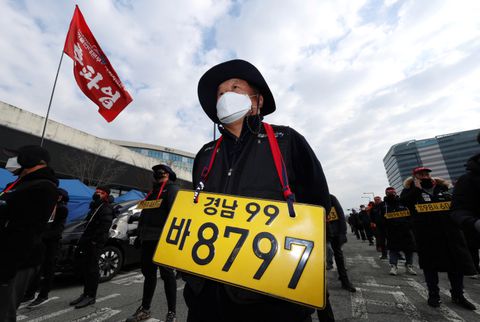 The South Korean government was moving on Wednesday towards ordering more truckers to return to work as their national strike entered its 14th day.

But the administration has so far failed to achieve a breakthrough in negotiations with the truckers, whose strike to extend an income-guarantee programme has widely obstructed shipments from the country, the world's sixth-biggest exporter.

Cabinet would meet on Thursday to discuss ordering drivers who serve the petrochemical and steel industries to get back to work, the Finance Ministry said.

The strike has disrupted supply chains and, according to the government, in its first 12 days delayed delivery of goods worth 3.5 trillion won ($2.65 billion).

Despatches of petrochemicals for domestic delivery were down to 65% of normal levels, the transport ministry said on Wednesday, while steel shipments for all customers were running at 47%.

Petrochemical companies are considering cutting production as early as next weekend due to shortages of raw material or space for storing inventory that cannot be despatched.

Despatches of cement have bounced back to 93% of normal levels from 10% earlier in the strike, thanks to the government telling drivers to return to work, according to the Korea Cement Association lobby group.

Although they are getting limited road freight service, ports are operating.

Suffering from soaring fuel costs, as many as 25,000 striking truckers are calling for a temporary minimum-pay scheme for their industry to be made permanent.

On Wednesday, some said loss of income in the strike was becoming difficult for drivers to bear.

"Every one of us made enormous efforts to stop our trucks," Lee Sung-chul, a striking cement trailer driver, told a meeting organised by a member of parliament on Wednesday.

"But the strike has gone on for more than 10 days. Given family finances and car instalments, some non-union drivers have started work again," said Lee, himself getting calls from his nervous wife to return to work.

Another striking trucker, Lee Geum-sang, who drives a fuel tanker, said he felt time was not on the truckers' side.

"It is very frustrating. I am afraid many drivers on the strike won't make it until next week," he said. (Reuters)