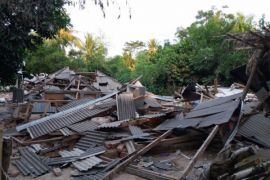 In regards with the earthquake that struck Lombok, West Nusa Tenggara, we will present you some songs in Sasak language for today’s edition. Sasak is known as the native tribe of Lombok Island.  A song entitled “Inaq Tegining Amaq Teganang” which was sung by tells about a couple of herds namely Inaq Tegining and her husband named Amaq Teganang. People said that Inaq Tegining and her husband love to tell stories, even they tell stories more frequently than the kings who give speech. The song entitled “Kadal Nongak” talks about someone that does not want to listen to the advices given to him. The person is personified as an arrogant lizard that lifts his chin. His boastfulness causes a lot of terrible impacts on him. The song “Kadal Nongak” is believed to contain many lessons. Therefore, students in NTB are often required to memorize it. The last song entitled “Sakitne Angen” tells about a brokenhearted woman who is betrayed by her lover because her lover has cheated her.

More in this category: « The Overtunes Tulus »
back to top
Home