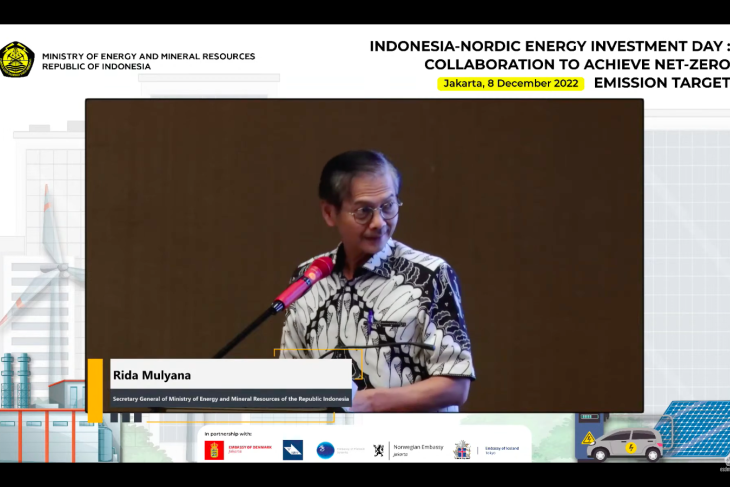 International partnership to support the blue economy and increase investment in the net-zero emission system is one of the principles of the G20 Bali Compact 2022.Secretary General of the Energy and Mineral Resources Ministry Rida Mulyana delivered the remarks during the "Indonesia-Nordic Investment Day: Collaboration to Achieve NZE Target" event, which was followed virtually from Jakarta on Thursday."The agreement serves as a voluntary principle to ensure effective energy transition mode for G20 members and so on. Energy transition has become the main focus of global change. During the G20 (Summit) this year, Indonesia raised the energy transition issue as one of the three discussion points," he said.The event is very relevantand has the potential to result in an actual commitment since, in the next four decades, Indonesia will produce more than 580 gigawatts of electrical energy, which will mostly comprise solar, hydro, geothermal, sea and hydrogen energy, or fossil energy, such as oil and gas, to support the transition to clean energy, he added.The Indonesian government has reportedly endorsed a strategy for reducing fossil energy by converting it into clean energy and stopped constructing coal-fired power plants."Of course, we need huge investment to support effective energy transition. The investment will reach US$25–30 billion, which is targeted to be achieved in mid-2030," he said.Indonesia is considered very competitive in the energy sector, for instance, it offers a variety of initiative projects under business-to-consumer (B2C) or business-to-business (B2B) schemes, he added.At the government level, Indonesia has signed a memorandum of understanding (MoU) with Finland regarding clean, efficient, and renewable energy and another MoU with Denmark concerning renewable energy and energy conservation.In addition, Indonesia has also set up a working team with Sweden for the renewable energy project and bilateral consultation."We also have energy partnership called INDODEPP with Denmark. Also, we team up with Iceland in the field of capacity-building and geothermal potential initiative," he said. (Antaranews)