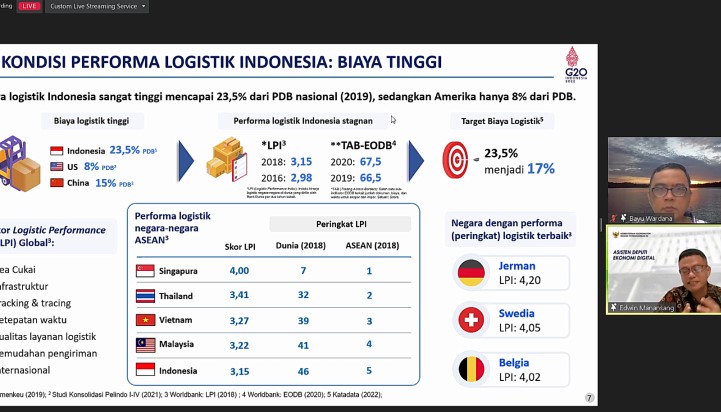 Logistics costs in Indonesia, which reached 23.5 percent of the national gross domestic product (GDP) in 2019, are relatively high, the Coordinating Ministry for Economic Affairs has said.Meanwhile, the nation’s logistics sector contributed 3.15 percent to the GDP in 2018, it added.According to World Bank data on Logistics Performance Indicators (LPI), Indonesia placed 46th in logistics performance globally and 5th in the ASEAN region in 2018."This figure is indeed higher in comparison to other countries, such as Singapore, America only 8 percent, the European Union and Japan, South Korea only 9 percent," assistant deputy for digital economy at the ministry, Edwin Manansang, said at a webinar, which was followed from here on Thursday.The webinar discussed the logistics challenges and opportunities for micro, small, and medium enterprises (MSMEs)According to Manansang, the country's geographical conditions have compromised the logistics sector's performance, keeping it from becoming optimal and posing problems for logistics operators.Other problems pertaining to logistics have involved shipping to rural areas outside cities and outside Java, and fragmented warehousing problems and logistics actors, which have prevented effective and efficient business operations."About 70 percent of logistics business actors are small players and the warehouse process is still manual," he noted.Then, the utilization of trucks for transporting goods is not yet optimal, and there are still many MSMEs that rent trucks to send goods between cities using a one-time system only."So the time to return costs so that the cost is doubled," he explained.Then, information related to delivery, delivery time is still not standardized and not integrated, he noted.He said that to resolve these logistical problems, the government has created the NLE (national logistics ecosystem) platform, which integrates data on the international flow of goods and documents from the time of arrival of the means of transport at a port till the goods arrive at a warehouse (hinterland).The NLE platform, which is in line with Presidential Instruction Number 5 issued this year, aims to improve national logistics performance, the investment climate, and the competitiveness of the national economy. (antaranews)