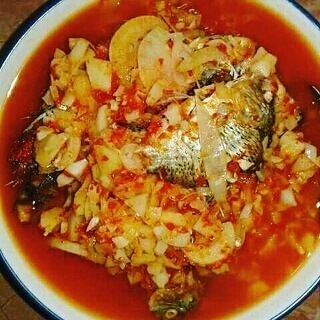 Indonesia is well known to have various kinds of traditional foods which are unique and delicious. The uniqueness of the foods can be from how to cook it. There is traditional food which is processed by fermentation to avoid the food becoming rotten. One of them is Lemea, food from Lebong regency, Kepahiang, North Bengkulu. Lemea is fermentation food of Rejang tribe. Rejang tribe is one of national tribes which is spread out in Bengkulu province. The main ingredient of the food is Rebung or young bamboo which has a lot of nutrition such as protein, amino acid, carbohydrate, and anti-oxidant. Usually in Lemea, Rebung is mixed with fish and then fermented. The fish, which is usually used, is Tilapia and Sepat fish. Making process of Lemea takes long time. Because in its process, raw ingredients of the food must be fermented for around 3 days. To make it, firstly the Rebung and slices of fish are mixed. Then, the dough is restored for 3 days in  a closed container. After that, it is stored for 3 days in closed container. After 3 days, the fermented dough is processed again by being cooked and mixed with coconut milk and ingredients such as red onion, garlic, chili, lemongrass, sugar and salt. Lemea has typical and unique taste, but it is no less delicious with other regional traditional foods in Indonesia. Sour and spicy taste from fermentation and its ingredient makes anyone who tastes it, want to enjoy eating it more and more. Until now, many people enjoy Bengkulu traditional food. Even, the food is packed and exported to Japan. In Bengkulu, the food still becomes daily menu at home. If you are interested to taste Lemea, you will be not difficult to find it because there are many restaurants in Bengkulu selling this food.