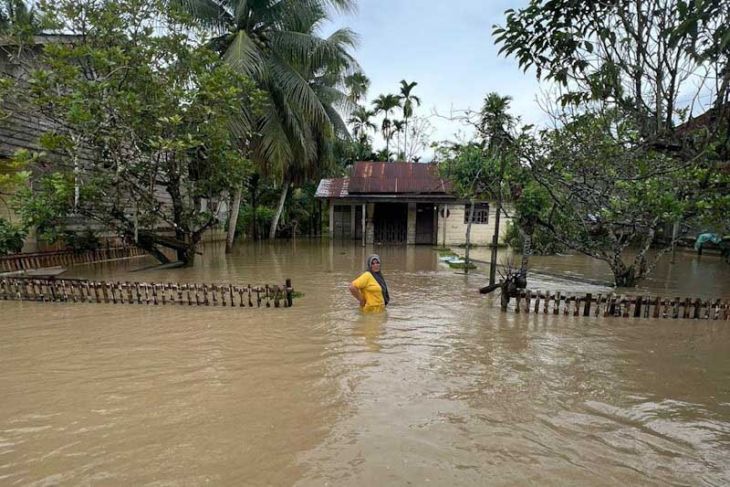 The Regional Disaster Mitigation Agency (BPBD) of North Aceh district, Aceh province, has reported that 21,389 people from 4,234 families have been affected by the floods in the region over the past three days.The floods have been caused by the overflow of several rivers due to heavy rains over the past few days.The floods that have occurred in the past three days have become increasingly widespread and have now inundated 8 of the 27 sub-districts in the district, head of the BPBD's prevention and preparedness division Mulyadi informed in North Aceh on Monday."Based on the current data, 21,389 people from 4,234 families have been affected by the floods. Of the number, 2,311 people from 649 families have been displaced to four locations. The floods have inundated 904 residents' houses," he added.Floods with the maximum water level reaching 3 meters have been recorded in Langkahan sub-district following the collapse of the Krueng Arakundo river embankment."Floods in the Langkahan sub-district cover two villages, namely Geudumbak village and Buket Linteung village. Apart from inundating residents' houses, the floods have also submerged public facilities such as schools and Islamic boarding schools," he said.Meanwhile, the other 7 affected sub-districts are Tanah Luas (3 villages affected), Matang Kuli (19 villages), Pirak Timu (14 villages), Lhoksukon (13 villages), Samudera (1 village), Sawang (1 village), and Banda Baro (1 village)."The number of villages inundated by floods in 8 sub-districts has so far reached 54 villages. The water levels vary from 30 to 100 centimeters. Meanwhile, in Langkahan sub-district, it reached 3 meters," Mulyadi revealed.He further said that the floods inundated 630 hectares of rice fields owned by the residents of Matang Kuli sub-district, putting them at risk of crop failure."We appeal to residents to remain alert and not to panic. The BPBD team continues to monitor flood-prone areas and prepare flood emergency response," he assured. (Antaranews)