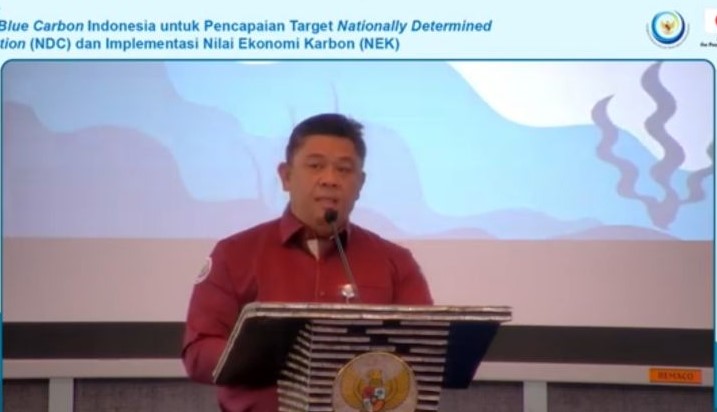 The Maritime Affairs and Fisheries (KKP) Ministry will step up efforts to conserve seagrass and mangroves as part of the government’s strategy to tackle climate change and improve blue carbon potential."(The development of) Indonesia's other blue carbon ecosystem (apart from mangroves), namely seagrasses, which has (cover) an estimated area of 1.8 million hectares, has not received much attention so far," director general of sea spatial management of the ministry Victor Gustaaf Manoppo observed.He made the statement during a workshop on the “Blue Carbon Strategy for Achieving Nationally Determined Contributions (NDC) Targets and Implementation of Carbon Economic Values (NEK)” on Tuesday.The seagrass ecosystem in Indonesia can absorb up to 790 million tons of carbon dioxide (CO2), with a projected economic value of US$35 billion, he informed.Meanwhile, Indonesia's mangrove ecosystem, which covers an area of around 3.36 million hectares, is expected to absorb 11 billion tons of CO2 with an estimated economic value of US$66 billion.Furthermore, as part of the implementation of climate change mitigation and adaptation attempts in the marine sector, the KKP Ministry is seeking to expand marine conservation areas by 30 percent in 2045.According to the ministry’s data, in 2022, Indonesia's marine conservation area only reached 28.9 million hectares, or 8.7 percent of the total area of the nation."By expanding the (conservation) ecosystem area to 30 percent, the seagrass and mangrove ecosystems in the conservation area will be able to absorb around 188 million tons of CO2 equivalent," Manoppo highlighted.Other efforts that will be carried out by the ministry to mitigate climate change will cover coastal and small islands management as well as marine area utilization arrangement.Blue carbon is carbon that is absorbed and stored in sea and coastal ecosystems. Biomass like leaves, roots, and trunks, as well as mangrove sediment and seagrass meadows can store four to five times more carbon than forests on land.Indonesia has shown its serious commitment to nurturing mangrove forests through their reforestation and restoration since 2010.In 2020, coastal ecosystem protection also became a strategic step in the process of national economic recovery from the COVID-19 pandemic through the implementation of a labor-intensive activity of mangrove planting in 34 provinces across Indonesia. (Antaranews)