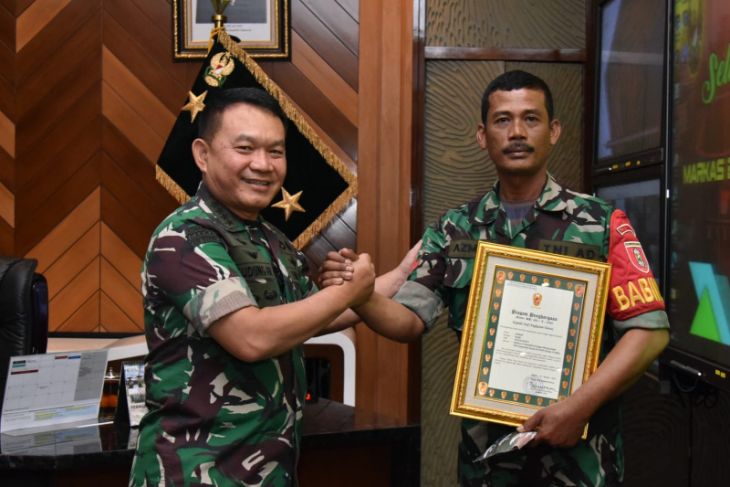 Chief of Staff of the Army (TNI AD) awarded an extraordinary promotion to a chief corporal for pawning his motorcycle to rent heavy equipment to free a trailer truck and end a 16-hour traffic jam.Chief Corporal Azmiadi of 0901/Samarinda District Military Command was showered with public praise for freeing the trailer truck that had gotten stuck at an incline in Gunung Manggah, Samarinda, East Kalimantan, causing a traffic jam for 16 hours. His actions went viral on social media.TNI chief General Dudung Abdurachman gave Azmiadi an extraordinary promotion. He was raised from chief corporal to second sergeant at a ceremony at the Army Headquarters on Tuesday, according to a statement issued here the same day."The Indonesian Army motto 'in the people's heart' must be implemented thoroughly. I have often said that the Indonesian Army must be loved by the people, but it will be more outstanding if the Indonesian Army loves the people," Abdurachman remarked.Azmiadi, who was accompanied by 0901/Samarinda District Military Commander Colonel Novi Herdian, told Abdurachman about his prompt decision to pawn his motorcycle to resolve the traffic congestion.Abdurachman lauded Azmiadi for adhering to the Army Chief of Staff's Seven Orders of the Day, particularly the fifth order, which calls upon TNI officers to be present in the community and provide solutions to issues that they are facing.The officer's action was also consistent with the sixth order, which asks TNI officers to increase public affection and support for the military by committing acts that support the people's well-being.The chief of staff said that other village-affiliated officers (Babinsa) must emulate the actions of Azmiadi, who was commissioned as a Babinsa at the 02/Sungai Pinang Sub-district Military Command.He also urged all Army officers to not hesitate to act and do their best for the benefit of the people and the nation. (Antaranews)