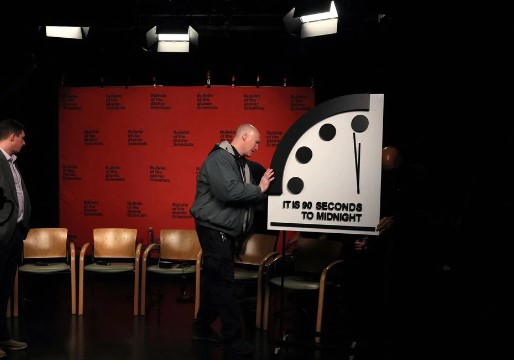 The Kremlin expressed alarm on Wednesday that the "Doomsday Clock" had edged closer to midnight than ever, even though the scientists who moved the symbolic dial cited Moscow's own "thinly veiled threats" to use nuclear weapons.

The "Doomsday Clock," created by the Bulletin of the Atomic Scientists to illustrate how close humanity has come to the end of the world, on Tuesday moved its "time" in 2023 to 90 seconds to midnight, 10 seconds closer than it has been for the past three years.

Midnight on this clock marks the theoretical point of annihilation. The clock's hands are moved closer to or further away from midnight based on scientists' reading of existential threats at a particular time.

"The situation as a whole is really alarming," Kremlin spokesman Dmitry Peskov told reporters, calling for a sober appraisal of the tensions between Russia and the West over the Ukraine crisis.

He said there was no prospect of any detente, based on "the line that was chosen by NATO under U.S. leadership".

"This imposes on us a duty to be particularly careful, to be alert and to take appropriate measures," he added.

On Tuesday, the Bulletin's president cited repeated warnings by President Vladimir Putin and other Russian politicians that Moscow might be prepared to use nuclear weapons as a key factor in the decision to advance the dial of the "Doomsday Clock".

"Russia's thinly veiled threats to use nuclear weapons remind the world that escalation of the conflict by accident, intention or miscalculation is a terrible risk," Rachel Bronson told a news conference in Washington. (reuters)