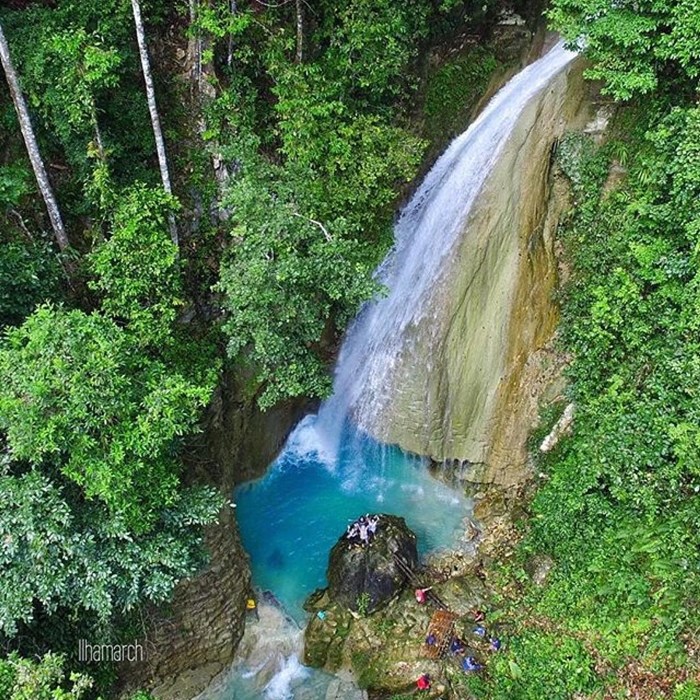 The nature of Maluku is so beautiful. It can be seen from many natural tourism objects which are beautiful and can be visited from under sea tourism objects. Maluku has beautiful islands, beaches with amazing sceneries and many others. Kei Besar island is one of the islands in Maluku which has many natural tourism potentials. One of natural tourism destinations, is Hoko waterfalls at Hoko village, Kei Besar district, Southeast Maluku regency, Maluku province. Hoko waterfall has fresh and clear water, which flows down through giant stone to natural pool under it. The pool has clear and calm water with colorful gradation of sky blue and also turkish green. At the pool, tourists can swim while enjoying the beauty of Hoko waterfall. In addition, the tourists can slide from the giant stone to the pool which is under it. Because of its beauty, Hoko waterfall becomes one of destinations worth being visited when taking holidays in Maluku. Because of its natural tourism beauty, Kei islands get valuable appreciation of Indonesian Charming Award from Indonesian Ministry of Tourism in 2016, with the title ‘One of the most popular hidden paradises  in Indonesia.’  Although the waterfall becomes popular destination, its beauty and nature are still protected well. To access Hoko waterfall, the visitors can visit Kei islands by plane from Pattimura international airport of Ambon to Karel Sadsuitubun airport, Southeast Maluku regency. After arriving in the Southeast Maluku, the visitors must use speed boat from Watdek port to Elat village. After arriving at Elat village, the visitors can use motor taxi or usually called ‘Ojek’ to Hoko village.