Getting Relaxed on Pramuka Island 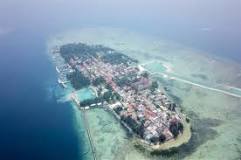 Having holiday is the right time to explore Indonesia. The biggest archipelagic country in the world has many tourism objects. One of which is Pramuka Island. The island is located in the area of Thousand Islands of Jakarta province. The island has the name,  “Pramuka” which means “scot” because the island has been often used as place to conduct scout’s activities since 1950s. Before the island became hamlet, it was the habitat of Indonesia’s endemic animal, namely the brahminy kite (Haliastur indus), also known as the red-backed sea-eagle in Australia. They are found in the Indian subcontinent, Southeast Asia, and Australia. Unfortunately, since 1980s, this kind of animal cannot be found anymore on this island. Remains of the animals migrate to Kotok Island which is located in the Thousand Islands area. On Pramuka island, there is preservation place of hawksbill turtles which nowadays  its number has decreased so that these animals should be protected. In addition, there is also mangrove planting in a bid fortify the coastal area. The island provides various supporting facilities so that tourists who visit this island will have unforgettable experience. There is no hotel on Pramuka Island. To support this tourism object, Indonesian government through Tourism Ministry gives education for local people to provide their home as homestay with international standard. The local people are also directed to be able to give different experiences which cannot be found at other hotels. Hopefully, tourists can stay longer and they get closer to know more  activities which are usually conducted by the local people.
Natural potential of Pramuka Island has its own attraction for tourists.  The stretch of clean and soft white sand on the long coastline makes a calm atmosphere and creates a romantic nuance when the sun begins to set on the western horizon. Diving and snorkeling are the main activities which can do on the island. Its clear water and coral reefs which are still natural make the beauty of amazing nature.

More in this category: « Batu Kumbang Beach Gulai Talang from Jambi »
back to top
Home