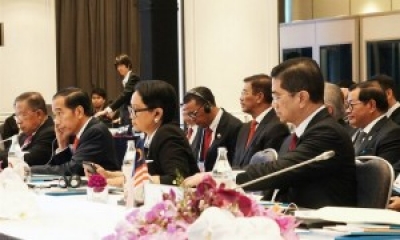 President Joko Widodo (Jokowi) assesses Sub-Regional cooperation such as Brunei Darussalam-Indonesia-Malayasia-Philippines East ASEAN Growth Area (BIMP-EAGA) is the right forum to promote concrete cooperation between regions of the region so that economic development and prosperity can also be felt together.

"We must continue to increase the availability of ICT infrastructure to support the new economic growth of the digital economy," said President Jokowi.

In addition, we must maximize the utilization of existing connectivity lines, for example, the Bitung-Davao shipping and Manado-Davao flights.

"Issues related to the availability of commodities, the value of transportation services, and the relaxation of regulations need to be accelerated. Monitoring and evaluation must be carried out to achieve the vision of BIMP EAGA 2025, "said President Jokowi.

Second, the President reminded that maritime potential needs to be improved so that an inclusive marine-based economic empowerment program must be supported.

In Indonesia, the President gave an example, having Aruna start the fishery trade which succeeded in increasing fishermen's income by 20 percent. Therefore, the President said that innovative steps like this must be one of Indonesia's future focuses.

"The maritime tourism sector by involving the wider community needs to continue to be developed, such as the concept of community-based eco-tourism and cruise and yacht tourism," said President Jokowi.

Third, President Jokowi called for networking among his main private sectors through the BIMP-EAGA Business Council to be strengthened.

At the end of his remarks, the President conveyed that Indonesia saw an urgency to establish a Joint BIMP-EAGA Secretariat to support the implementation of various programs in the BIMP-EAGA 2025 vision.

In addition, President Jokowi also wanted to underline the importance of attention to security issues in the sub-region because various security threats such as kidnapping at sea, disrupting economic activities, especially the potential of maritime economy.

"For this reason, the effectiveness of security cooperation needs to be improved," said President Jokowi.