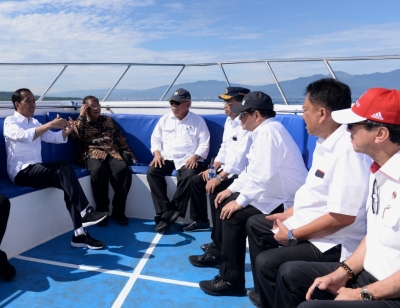 President Jokowi discussed with a number of officials as he headed for Bunaken National Park, in Manado, North Sulawesi. Friday (5/7) morning. kemensetkab

President Joko Widodo (Jokowi) hopes that the potential of Bunaken National Park tourism, known for its underwater beauty and rich biodiversity, must be maintained and maintained properly, because it can become one of the largest tourism forces in North Sulawesi in the future.

"I think this is a very good potential, but it must be maintained and guarded not to get plastic garbage into here. In the past, I have seen it (clean) because routine from the regional government always cleanses its marine debris, "President Jokowi said when with First Lady Iriana reviewing Bunaken National Park, North Sulawesi, Friday (5/7) morning.

The President and his entourage left for the location of the pier in the hotel area where they stayed by boarding the Bunaken Crystal 7.

After approximately 45 minutes of travel, the group arrived at Bunaken Pier and changed a special boat equipped with a ship's lower space to go to the high seas and enjoyed the beauty of tropical fish and exotic coral reefs in one of the waters in the highest biodiversity place in the world.

Aware of the great potential of Bunaken National Park, the central government immediately moves to make one of the tourist areas more organized and integrated.

Looking ahead, the underwater tourist destination is expected to be much more visited by tourists, especially foreign tourists, along with the development of North Sulawesi tourism supporting infrastructure by the government so that it requires careful planning.

The Bunaken National Park area is indeed one of the tourism magnets of North Sulawesi Province. Every year, the local government holds the Bunaken Enchantment Festival which is always in demand by foreign tourists.

Regarding this, the President stressed that he was competing with time and increasing demand from tourists. For this reason, the central government is committed to providing full support for the development of tourism in North Sulawesi.

"We are going to the field to pursue it. If we are mediocre we may not (effort), but this is an extraordinary situation that tourists want to enter and we must prepare, "said President Jokowi.

Improvement and similar development, the President continued, will also be carried out in tourist destinations in other provinces that have the potential to be developed further.

In the near future, the President plans to start going down to other destinations, one of which is Labuan Bajo in NTT, to help provide support to the local government in developing tourism potential that has an impact on the regional economy.