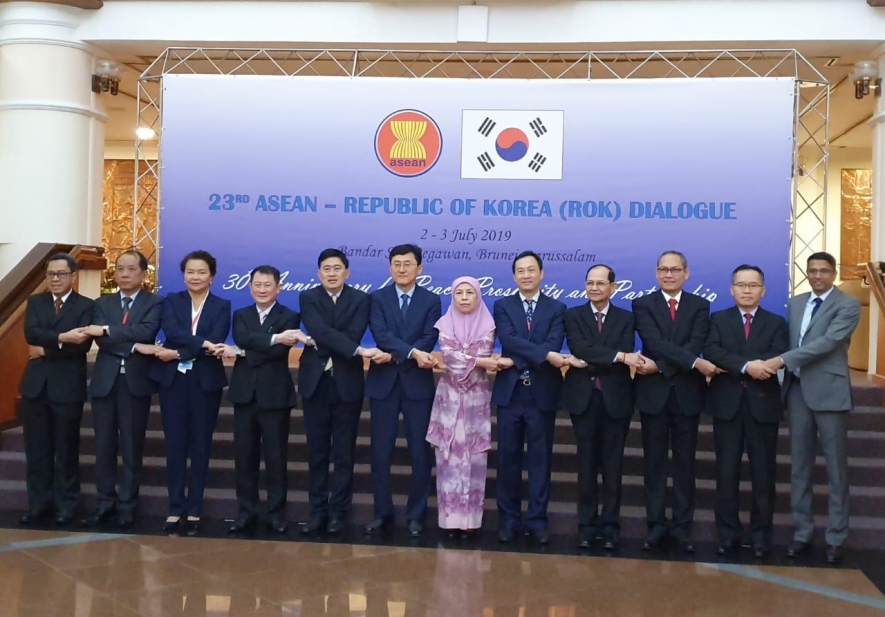 Meeting of ASEAN and ROK kemenlu

"Garbage in the sea, especially plastic waste, is a big threat, not only for biodiversity and the marine environment, but also for tourism and the fishing industry. Therefore, we invite ASEAN and South Korea to work together to overcome the problem of plastic waste at sea, "said Jose Tavares, Director General of ASEAN Cooperation of the Indonesian Ministry of Foreign Affairs and Chair of the Indonesian Delegation at the 23rd ASEAN-Republic of Korea (RoK) Meeting Dialogue in Bandar Seri Begawan, Brunei Darussalam (2-3 / 7).

In addition to maritime cooperation and marine conservation, the 23rd Meeting of the ASEAN-Korea Dialogue also discussed the ASEAN Cultural House (ACH) which was established in Busan, South Korea, and officially opened in 2017 to introduce and promote ASEAN to South Korean communities through cultural channels.

Indonesia conveyed its optimism regarding the potential of ACH in contributing to the increasing closeness of South Korean and ASEAN relations. Indonesia encouraged ACH to be able to make the best use of the moment of organizing the 30th Anniversary of the ASEAN-Korea Partnership Cooperation to be held in Busan to further promote ASEAN to the South Korean community.

"I am sure that Busan and its people have the capacity, creativity and enthusiasm to hold an impressive ASEAN-Korea Partnership Commemoration Summit," continued Jose Tavares.

The ASEAN-Korea cooperation has been going well for almost 30 years since 1989. The ASEAN-Korea partnership is further strengthened by increasing the level of partnership cooperation from a comprehensive to a strategic partnership in 2010. Furthermore, to increase cooperation it becomes more concrete, the 17th Summit ASEAN-Korea in Kuala Lumpur, on November 22, 2015, has ratified the ASEAN-RoK Plan of Action to Implement the Joint Declaration of Strategic Partnerships for Peace and Prosperity for the 2016-2020 period.

The ASEAN-RoK Dialogue meeting itself is the annual ASEAN-Korea meeting at the level of the High Official / SOM. The 23rd meeting this time was chaired jointly by His Excellency Emaleen Abd Rahmad Teo, Chair of the ASEAN-Brunei Darussalam SOM and His Excellency Yoon Soon-gu, Chair of the SOM ROK. (Source: ASEAN External Cooperation Directorate)