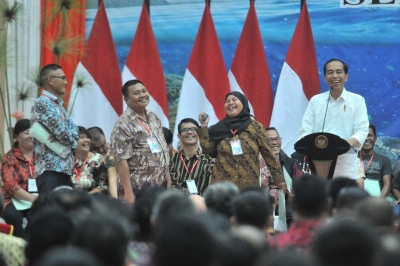 The Government aims to develop tourism in North Sulawesi to boost economic growth in the region, according to President Joko “Jokowi” Widodo.

The President added that the Government has decided to start the terminal construction in Sam Ratulangi Airport in September this year and is expected to complete the project in August 2020. The Government, he added, has also decided to extend the runway so that large aircraft could land in Manado.

President Jokowi went on to say that the Government will also redevelop the plaza at the coastal area to attract more visitors.

He further said that the residents of North Sulawesi should keep maintaining their hospitality, as well as maintaining cleanliness at restaurants, food stalls, and toilets in order to develop tourism in the region, including in Bunaken, Likupang, and Lembeh island.

He added that the construction of various infrastructure facilities in the regions is expensive, but it will generate income and foreign exchange from tourists.

More in this category: « KPU Declares Joko Widodo as President-Elect for 2019-2024 Ratification of the RI-Iran MLA Agreement and Extradition Agreement »
back to top
Home
http://wowza58.indostreamserver.com:1935/voinews/live/playlist.m3u8