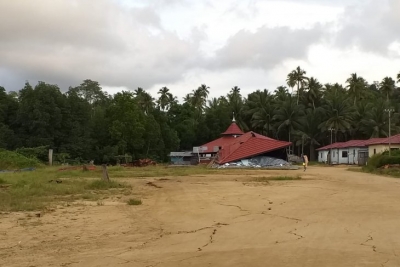 A magnitude-7.2 earthquake that hit South Halmahera District, North Maluku Province, on Sunday evening, claimed two lives and displaced 1,104 people. "The two fatalities are respectively, Aisyah, 51, from Gane Luar, and Halimah from Papaceda Village, Gane Barat Sub-district," Ali Yau, secretary of the North Maluku Disaster Mitigation Office (BPBD), stated in Ternate, North Maluku, on Monday. The displaced people are being accommodated at nine locations in Gane Barat, Gane Timur, and Bacan Timur. Yau noted that his office had deployed personnel to evaluate the condition in several villages in Gane Barat after the powerful earthquake struck. The Ternate military command 152/Babullah had also deployed a platoon of personnel to secure South Halmahera. In Lemo-Lemo Village, 300 people were displaced, as their homes collapsed following the tremor. In Ranga-Ranga, 800 villagers are seeking refuge in a hilly area over fears of an ensuing tsunami. In the Nyonyifi coastal village, several houses and small piers incurred serious damage, though no casualties were reported. The earthquake, measuring 7.2 on the Richter Scale, rocked North Maluku, on Sunday at 6:28 p.m. local time, forcing local residents to flee their homes in panic. The tremor did not have the potential to trigger a tsunami. The quake's epicenter was located at 0.59-degree southern latitude and 128.06-degree eastern longitude, some 62 km northeast of Labuha, North Maluku, and at a depth of 10 km below sea level, according to information on the website of the Meteorology, Climatology, and Geophysics Agency (BMKG) on Sunday. Residents of the Labuha coastal area, the capital of South Halmahera District, immediately headed to higher ground once the tremor occurred, as they feared a tsunami. Kustoro, head of the Ternate meteorology, climatology, and geophysics office, noted that the earthquake did not have the potential to trigger a consequent tsunami. Labuha's residents felt the tremor of modified mercalli intensity (MMI) IV-V. The residents of Ternate, Tidore Islands, Central Halmahera, Ambon in Maluku Province, and also Bitung, North Sulawesi, felt the earthquake.  (ANTARA)

More in this category: « President Jokowi Requests Bunaken National Park to be Cared for and Maintained Minister Asks Plastic Producers to Join Fight against Marine Debris »
back to top
Home